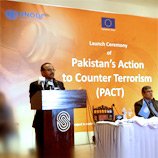 27 April 2017 - The Government of Pakistan, the European Union (EU) and UNODC launched in recent days a three-year technical assistance programme to support Pakistan's efforts in overcoming the challenges posed by terrorism.

The project, entitled "Pakistan's Action to Counter Terrorism with a special reference to Khyber Pakhtunkhwa (KP) province," will improve the skills and knowledge of investigators, prosecutors and judges, and promote the use of forensic evidence in terrorism. It also aims to strengthen coordination between the National Counter Terrorism Authority (NACTA), the Counter Terrorism Department of KP, and the Islamabad Police.

Supported by the European Union, the project was developed by NACTA on behalf of the Government of Pakistan in collaboration with UNODC. During its development stages, both provincial and federal stakeholders were closely consulted to ensure that the objectives would directly contribute to the needs of State institutions.

The launch ceremony was attended by senior members of NACTA, the Ambassador of the EU Delegation to Pakistan, the UNODC Country Representative, and Ambassadors of various countries. Representatives from the diplomatic community, civil society and media organizations were also present.