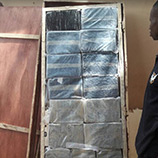 19 July 2017 - According to the  World Drug Report of 2017, West Africa's role in global drug trafficking is becoming a growing concern. In the Sahel region, drug trafficking is intrinsically linked to terrorism as drug proceeds are often used to finance related activities. In this regard, the report affirms that Al-Qaeda in the Islamic Maghreb (AQIM) is involved in cannabis and cocaine trafficking in the Sahel.

Countries of the region are stepping up efforts to tackle this phenomenon. In Mali, for instance, after arresting a drug lord in May, law enforcement officers made several seizures in June 2017 through overland or aerial routes. Officers from the Joint Airport Interdiction Task Force (JAITF) of Bamako airport seized over 10kg of heroin concealed in two pieces of luggage which belonged to an inbound female passenger.

The Bamako JAITF has been established and trained since 2014 with UNODC support, in the framework of its Airport Communication Programme (AIRCOP), implemented in partnership with the World Customs Organization (WCO) and Interpol. This seizure follows the arrest of a drug kingpin by the Malian Office Central des Stupéfiants (Mali's centralized drug control institution, OCS).

More recently, the Malian police anti-drug squad seized over 100kg of cannabis. The drug was concealed in some wooden doors, set to be shipped to Dakar, Senegal.

Since 2014, through its  Sahel Programme, UNODC has undertaken 87 activities in the country, benefiting to 2.853 law enforcement and justice officials. Several of these activities were conducted in partnership with United Nations Police (UNPOL) and the United Nations Multidimensional Integrated Stabilization Mission in Mali (MINUSMA) from the  Department for Peacekeeping Operations (DPKO).

Having organized 10 sessions on investigation and drug identification techniques, UNODC continues to provide trainings to the law enforcement entities involved in the aforementioned seizures.

In this regard, the OCS pointed to the success stories, saying: "The multiple training sessions delivered by UNODC, and in particular those related to concealment methods and general knowledge on drugs, allowed making this record seizure."

Capacity-building of law enforcement officials, in the framework of the fight against drug trafficking, is a central component of UNODC's work in West and Central Africa. To address these challenges effectively, UNODC places emphasis on aerial, maritime and land border control, investigation and drug identification, as well as regional intelligence sharing.

The recent seizures made by the Malian authorities showcase increased ownership of the techniques provided during UNODC training sessions. They also show thorough engagement on behalf of the Malian government to fight against the threats affecting the region in an efficient and sustainable fashion.

The AIRCOP Project is funded by the European Union, Japan, Canada, Norway, and the USA, and implemented by UNODC in partnership with the World Customs Organization (WCO) and INTERPOL.