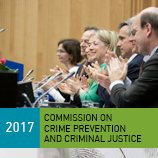 26 May 2017 - We must all work together to protect lives and promote peace, UNODC Executive Director, Yury Fedotov, said in a statement today.

"The terrible tragedy in Manchester reminds us that we must remain united against terrorism and violent extremism," Mr. Fedotov said.

He observed that the Crime Commission opened just as the global ransomware attack started. The cybercrime attack revealed a need to improve responses to transnational organized crime, and emphasized the importance of international cooperation and action to counter crime.

"UNODC is fully engaged in supporting [Member States] to strengthen cooperation and build capacities to meet the many collective challenges we face," said Mr. Fedotov.

The UNODC Chief's statement was read by the Director of UNODC's Division for Treaty Affairs, John Brandolino.

A series of resolutions were also agreed to guide preparations for the 2020 Crime Congress  in Japan, and to promote implementation of the Doha Declaration and help realize the 2030 Agenda for Sustainable Development.

In one resolution, the Crime Commission called on all those countries who have not done so to consider ratifying the UN Convention against Transnational Organized Crime and its protocols on migrant smuggling, trafficking in persons, and the illicit manufacture and trafficking in firearms.

The Crime Commission brings together around 1,000 delegates drawn from Member States, civil society and academia. Over 100 side events were held during the five days of the Crime Commission, as well as numerous exhibitions.