"Here today, tomorrow, and the day after": How human security efforts are producing results in Peru 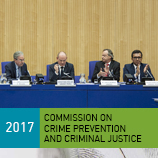 Elohim Monard from the Peruvian Interior Ministry tells an arresting story about an old neighbourhood in Peru's capital Lima.

The neighbourhood called Matute had become a tough place to live and people started calling it "The Jungle" due to its many problems.

"From the very start", Mr. Monard said, "government officials refused to call it The Jungle and insisted on calling it by its proper name." The officials hoped the practice would soon spread.

The reason, he said, was that using the new name would have stolen away the community's identity and disempowered the people who lived there. "We didn't want to call it The Jungle because we didn't want to stigmatise," said Mr. Monard.

Almost inevitably the district's bad perception would have been reinforced and the problem exacerbated.

Recovering identity, building resilience and empowerment are all central to a new programme called "Safe Neighbourhoods" (Barrio Seguro in Spanish) run by Peru and based on the UN Joint Programme on Human Security an initiative with UNODC as the lead agency, but also in partnership with UNDP, UNFPA, WHO and UNLIREC.

Bringing down crime, reaching out to youth, and empowering women are all part of this plan that concentrates on police, social and community prevention.

At present, the programme has focused on reducing crime in the city of Trujillo particularly in the districts of El Porvenir, La Esperanza and Florencia de Mora.

Mr. Monard plans to introduce the programme elsewhere. "It is time to scale up. For Peru to take the best practices and to go to other districts and expand the work," he said.

A special event on the side lines of the Crime Commission here in Vienna discussed the programme and its efforts in districts in Peru along the country's northern coast. The event was titled, "Human Security at Work in Peru: Safe Neighbourhoods."

Opening the session, the UNODC Deputy Executive Director and Director of Operations, Aldo Lale-Demoz  said, working with the Peruvian government, "We focused its work on youth and women. Youth because it is more often than not the principle victim of violence, and women because they are more often the principle agents of change."

Lale-Demoz said both women and youth are stigmatized when they live in unsafe neighbourhoods and this had led to discrimination, social exclusion and a lack of opportunity.

Trujillo, for example, is a heavily populated city along the northern coast of Peru. The city was twice the country's capital.

Until recently the city was known for its high crime rates. The murder rate was four times higher than the national average, but in recent times this trend has been steadily reversed.

In the past two years, thanks in part to the work of the programme, the murder rate plummeted by 40 per cent and just as importantly the perceived fear of crime fell.

Reasons for these declines in Trujillo are connected to the safe neighbourhoods' programme and following the blueprint of the successful UN Joint Human Security Programme.

Trujillo's story, however, also points to how, when regional and central governments are united in the delivery of a community-based crime prevention model, positive results are bound to flow.

During the panel session, Julio Corcuera the Coordinator of the UN Joint Human Security Programme in Peru said women were being empowered through assistance and follow-up on gender-based violence cases, children and youth explored violence through transforming art, and values were taught through team sports.

Mr. Corcuera noted that the programme had produced significant results, including 2,000 women trained in the promotion and exercise of their rights and over 7,000 children involved in saying yes to sports, but a firm no to violence.

Overall, in the areas examined, there had been a related reduction of the murder rate of 36 per cent, a fall in the negative perception of crime of 5 per cent and the destruction of some 3,000 guns.

Soon the safe neighbourhoods programme will spread to 21 other neighbourhoods and offer its mixture of better coordination, closer relationships with the police, cooperation between a range of other government ministries, better targeting of criminals and improved citizen engagement.

Mr. Lale-Demoz ended his speech by saying that ultimately Barrio Seguro was about making a positive difference in the "lives of real people. That is ultimately why we are here today, tomorrow and the day after."