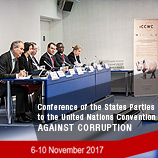 6 November 2017 - The Secretariat of the Convention on the International Trade in Endangered Species of Fauna and Flora (CITES) and UNODC spearheaded a number of events at the 7th session of the Conference of the States Parties to the United Nations Convention against Corruption (UNCAC CoSP7, Vienna, 6-10 November 2017) to encourage Parties to both conventions to tackle the corruption associated with illicit wildlife trade.

There is an increasing recognition that to curb the global surge in wildlife trafficking, the world's governments must increase their efforts to fight the corrosive corruption that enables it. Corruption fuels and abets transnational organized crime, and is particularly rife in high-value wildlife trafficking.

UNODC Executive Director Yury Fedotov said: "Corruption is multifaceted and can occur at every stage of the wildlife, forestry and fisheries value chain. It can include bribes for information on the movement of animals or patrols, or to obtain rights and quotas, or grease the wheels of shipments, to ensure that they are not inspected or seized. UNODC, as guardian of the UN conventions against corruption and transnational organized crime, is working with partners such as CITES to build understanding and ensure that wildlife, forest and fisheries agencies are trained and equipped to respond to corruption."

Addressing the UNCAC plenary in the opening session, CITES Secretary-General, John E. Scanlon said: "We cannot afford to turn a blind eye to this serious challenge. We have no option but to confront corruption head-on by fully deploying the international agreements created to combat corruption and to regulate wildlife trade in a coherent manner. The vast majority of officials are honest and committed and we salute them. Yet, we also see customs and police officials bribed, logging and hunting licences forged, and poachers and wildlife traffickers set free due to obstructed prosecutions. We must root out the 'bad apples' and deepen efforts to build and maintain properly paid, trained and equipped civil services. The ratification and implementation of the UNCAC is central to this work."

Cooperation between UNCAC and CITES is at an all-time high. Both CITES and UNODC have been encouraging Parties to both conventions to take steps to address this important issue and are working together to integrate the tools to prevent corruption, and to facilitate the prosecution and punishment of offenders, while enforcing the international rules set by CITES for trade in wildlife.

At CITES CoP17 held in Johannesburg, South Africa last year, CITES Parties adopted, for the first time, a dedicated resolution on corruption ( Resolution 17.6 on Prohibiting, preventing and countering corruption, which facilitates activities conducted in violation of the Convention). Among other things, this resolution urges all Parties to CITES to adopt measures to counter instances of corruption and ensure that any corrupt practices associated with the administration, regulation, implementation or enforcement of CITES are punishable with appropriate penalties under national legislation.

Corruption is also addressed in the first ever  World Wildlife Crime report, published by UNODC in 2016, with support from the International Consortium on Combating Wildlife Crime (ICCWC). The report records more than 7,000 endangered species of wild animals and plants illegally traded across 120 countries, where corruption is one of the major facilitators of poaching and trafficking. The international illicit trade in live great apes would not be possible without corruption. African elephant poaching in conflict zones suggests that corruption, rather than conflict, is the primary enabler of elephant poaching.

It therefore remains essential that Parties to both conventions step up efforts to ensure that measures are in place to identify, prevent and address corruption. It is crucial that anti-corruption bodies and other relevant agencies get involved as the issue is too big to be dealt with by wildlife, forestry and fisheries management authorities alone.

A number of tools are currently being developed under the auspices of ICCWC, which is a collaborative effort of the CITES Secretariat, INTERPOL, the United Nations Office on Drugs and Crime, the World Bank and the World Customs Organization. These tools include anti-corruption guidelines that could be used to promote adequate integrity policies and assist member States to mitigate the risks of corruption in the trade chain as it relates to CITES-listed specimens. ICCWC is also delivering a number of activities to support the implementation of national anti-corruption measures and strategies.

Remarks of UNODC Executive Director Yury Fedotov on Special event on "The elephant in the room: addressing corruption linked to wildlife crime"