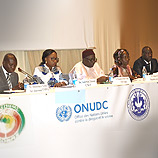 10 April 2018 - In Africa, the use of drugs, including cocaine, opioids, amphetamine-type stimulants and new psychoactive substances, has increased, according to the 2017 report of the International Narcotics Control Board (INCB). At the global level, only one out of six people in need of drug dependence treatment has access to treatment programmes while this figure in Africa is only one out of 18.

Promoting a public health and human rights-based approach, UNODC recently supported the establishment of a university curriculum to train addiction specialists. Launched in February 2018, the first university degree in addiction studies in West Africa aims to improve the quality of human resources dealing with drug users' health care and to contribute to change in therapeutic methods in the region. The course is offered by the Faculty of Medicine, Cheikh Anta Diop University in Senegal.

Speaking on behalf of UNODC Regional Representative for West and Central Africa, Babacar Diouf, Programme Officer, said: "UNODC is proposing a balanced approach regarding drug issues. ECOWAS and the European Union welcome the establishment of this university diploma, which reinforces current initiatives on drugs control."

The curriculum is composed of about a dozen modules ranging from psychopathology of addictions to clinic of addictions and to psychoactive substances. It also includes modules focusing on legal aspects and the reduction of risks related to addictions.

The inaugural lecture was attended by over 100 participants, including university authorities, representatives of international organizations, anti-drug experts, law enforcement agencies, and partners supporting the project.

Professor Mamadou Habib Thiam, Head of the Department of Psychiatry, Fann University Hospital said: "The health costs of drug abuse represent up to 2 per cent of GDP for some countries and the university can help find solutions in drug demand reduction. This course will be a tool for the improvement of health care services for drug users."

Echoing that sentiment, Professor Aida Sylla, Head of the Division of Mental Health, Ministry for Health of Senegal said: "The introduction of this degree raises a lot of hope for addressing the lack of specialists and epidemiological data on drugs."

This course is the climax of a long process that started in Senegal with the 2011 "UDSEN'' survey as the results has allowed the collection of reliable qualitative and quantitative data on "Injecting Drug Users in the Dakar region". The Integrated Addictions Management Centre of Dakar (CEPIAD) was then created with the support of UNODC and other donors, including the National AIDS Control Council (CNLS), ESTHER (now Expertise France), the Global Fund, the Paris City Hall, and the Initiative 5%.

UNODC supported the creation of the CEPIAD in 2014, and the training of addiction specialists. Currently, about 200 patients are being treated, in addition to several hundred addicted drug users who have benefitted from the centre.

UNODC has provided technical assistance to West African States for the past 20 years through its Regional Office for West and Central Africa in Dakar, Senegal and 11 other local offices based in different countries of the region.