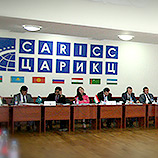 12 April 2018 - Illicit financial flows make national borders increasingly irrelevant. Funds are moved across jurisdictions with a click of a button as technological developments make these transactions easier, faster and difficult to trace.

With a view to countering illicit financial flows in West and Central Asia, UNODC and the European Union Action Against Drugs and Organised Crime (EU-Act) jointly organized a regional workshop on "Financial Disruption of Illicit Financial Flows Associated with Transnational Organized Crime" in Almaty, Kazakhstan from 3 to 5 April 2018.

"Drug trafficking and related crimes are transnational security threats for the entire region and due to their negative impact on the social and security environment, a comprehensive approach is required by Governments and the international community," said Traian Laurentiu Hristea, Ambassador of the European Union in Kazakstan, speaking at the workshop.

During the three-day event, participants identified gaps in their respective legislations and shared best practices and information about cases involving financial investigations, arrest of individuals and seizures of drugs and money. Representatives of Kyrgyzstan and Kazakhstan reported the results of a joint operation supported by UNODC's Regional Programme for Afghanistan and Neighbouring Countries, and which led to the dismantling of a criminal ring in Central Asia and to the seizure of a significant quantity of heroin.

The workshop also provided an opportunity to discuss various topics: the risks connected to the abuse of money and value transfer services; including of unwitting money service providers; contactless payments to purchase drugs; trade based money laundering; the role of the financial sector in disrupting financial crimes; and the importance of public-private partnership.

Additionally, three tabletop exercises were conducted on financial investigations related to drug trafficking and anti-money laundering, giving participants a realistic grasp of the importance of cooperation and the challenges therewith. Further, representatives of financial intelligence units shared challenges and achievements regarding the exchange of information on suspicious financial transactions.

At the end of the event, participants expressed their appreciation to UNODC for the assistance provided through the Regional Programme. The support has improved Member States' capacity to share information and coordinate operations, thus significantly reducing the time needed to process and provide information on suspicious financial transactions, in some cases from 120 to 15 days.

Funded by the European Union, the event was supported by UNODC Regional Programme for Afghanistan and Neighboring Countries, UNODC Global Programme against Money Laundering, Proceeds of Crime and the Financing of Terrorism; the Central Asian Regional Information and Coordination Centre for Combating Illicit Trafficking of Narcotic Drugs, Psychotropic Substances and their Precursors; and the Eurasian Group.