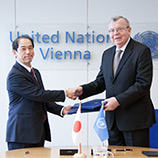 At the signing ceremony, Mr. Fedotov expressed UNODC's appreciation for the support provided by the Government of Japan in past years and for the upcoming period. In 2018, the country's supplementary budget contribution to UNODC is of $28.4 million - a 25 per cent increase compared to the previous year.

Mr. Fedotov said: "UNODC will be able to further advance its essential work in Asia and Africa as well as in Afghanistan and neighbouring countries, thanks to our growing partnership with Japan and the increased funding support provided by the government. Japan is a committed partner to UNODC's global efforts against the interrelated challenges of illicit drugs, transnational organized crime, corruption and terrorism. I look forward to closer cooperation in the future."

Speaking at the signing event, Ambassador Kitano said: "Japan is pleased to contribute to UNODC on issues related to drugs and crime, taking into account gender aspects and seeking geographic balance in the allocation of the contribution."

Ambassador Kitano reiterated his country's commitment to further strengthening its relationship with UNODC through strategic dialogue and enhancing joint actions for fruitful cooperation.

Part of the total amount - around $165, 000- was provided by Japan's Drug Abuse Prevention Centre (DAPC). UNODC and DAPC have been cooperating since 1994, and since then the Centre has raised some $6 million in support of the demand reduction work of UNODC. At the end of the signing ceremony, Mr. Fedotov presented to Mr. Kitano the report of the activities funded by the DAPC 2017 contribution.