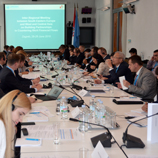 12 July 2018 - The UN Office on Drugs and Crime (UNODC), through its Regional Programmes for Afghanistan and Neighbouring Countries and South Eastern Europe, recently held an inter-regional training workshop on 'Building Partnerships in Countering Illicit Financial Flows".

The two-day meeting, organized in partnership with the Ministry for Foreign Affairs of Croatia, took place in Zagreb. Opening the meeting, Amir Muharemi, Assistant Minister for Multilateral and Global Affairs of Croatia, welcomed the participants and commended UNODC for its innovative approach to enhance cooperation at the interregional level.

The event focused on a number of topics, including challenges and prospects for cooperation, with a particular emphasis on illicit financial flows in line with the 2016 UN General Assembly Special Session (UNGASS) outcome document.

The event started with an overview of the trends and analysis of illicit financial flows along the three drug trafficking routes from Afghanistan. The updated report on the trafficking of opiates along the Northern Route was presented by the UNODC staff.

On that point, Mr. Schmidt said: "UNODC would continue supporting Member States, in close cooperation with partners, to tackle drug-related crime and illicit financial flows, using all the tools at our disposal."

Among the discussed issues were the role of the private sector, particularly the banking industry, and money transfer services such as hawala in the disruption of illicit financial flows. The meeting contributed to exchange of best practices and raised awareness on the importance of cooperation at the regional and inter-regional levels, including the need to support Afghanistan in the fight against drug trafficking and organized crime.

In this regard, Salamat Azimi, Minister for Counter Narcotics of Afghanistan, commended UNODC on its initiative to convene the meeting and reiterated her country's commitment to fight against drugs trafficking in synergy with all relevant regional and international partners.

The event was attended by more than 80 participants including heads of drug control agencies, financial intelligence units, and other relevant stakeholders from Afghanistan, Albania, Bosnia and Herzegovina, Croatia, the former Yugoslav Republic of Macedonia, Iran, Kazakhstan, Kosovo (under the Security Council resolution 1244 (1999)), the Kyrgyz Republic, Montenegro, Pakistan, Serbia, Tajikistan, Turkmenistan and Uzbekistan, as well as members of the donor community.

The event was funded by the European Union and the Government of Turkey.