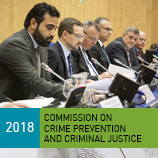 18 May 2018 - On the side-lines of this week's Commission on Crime Prevention and Criminal Justice (CCPCJ), UNODC organized a high-level event on "Security Sector Reform as a Tool for Conflict Prevention".

Sponsored by the Organization for Security and Co-operation in Europe (OSCE) and the Government of Slovakia, the event focused on the role of security sector reform and governance as a tool for conflict prevention, particularly in the context of transnational organized crime.

Speaking at the event, Yury Fedotov, Executive Director of UNODC, said: "Supporting conflict prevention through security sector reform is a highly relevant priority, which is fully in line with the UN Secretary-General's vision."

Describing the event as an opportunity to discuss current efforts, challenges and future prospects for security sector reform, he said: "UNODC support prioritizes national ownership and regional approaches, both of which are critical for sustainability and effectiveness in addressing transnational threats."

Joining him, Thomas Greminger, Secretary General of OSCE, pointed to challenges: "Transnational organized crime harms communities and families. It hinders sustainable development." Welcoming the recent integration of security sector reform and governance as a new topic in the OSCE-UNODC Joint Action Plan for 2018-2019, Mr. Greminger said he would welcome a closer co-operation in the future.

Also speaking at the event, Michal Mlynár, Permanent Representative of Slovakia to the United Nations in New York, stressed: "A well-governed and accountable security sector is a pre-condition for addressing transnational organized crime effectively. Similarly, Ján Kubiš, Special Representative of the UN Secretary-General and Head of the UN Assistance Mission in Iraq, emphasized the need for ownership, partnership and an inclusive approach "in order to effectively reach a security environment".

Also addressing the side event were Jabir Hemaidawi, Permanent Representative of Iraq to the UN in Vienna; and Masood Ahmad Azizi, Afghanistan's Deputy Minister of Internal Affairs. They called upon the international community to provide further support, which in turn, will help Afghanistan and Iraq effectively implement the reforms.

The panel discussion was organized in the context of the "Peacebuilding and Sustaining Peace" as one of the goals of the security sector reform and restructuring of the UN's peace and security pillar.