UNODC calls for shift in paradigm: From women as victims, to women as powerful agents of change 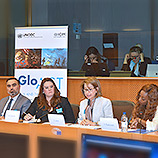 Brussels (Belgium), 11 December 2019 - On the occasion of the 2019 campaign '16 Days of Activism against Gender-Based Violence' and International Human Rights Day, the United Nations Office on Drugs and Crime (UNODC), under the framework of the Global Action against Trafficking in Persons and the Smuggling of Migrants, organized a special event jointly with the European Commission.

Hosted by Franco Roberti, MEP, on 10 December, it featured an all-female panel addressing trafficking of women and girls for sexual exploitation within the context of conflict and post-conflict situations.

Myria Vassiliadou, EU Anti-Trafficking Coordinator, reiterated the need to stop the culture of impunity related to trafficking in human beings, while Suzan Aref, Founder and Director of Women Empowerment Organization in Iraq and Coordinator of Iraq's Cross Sector Task Force on United Nations Security Council Resolution 1325, explained that, "challenges related to trafficking of women in Iraq are a lack of specialized trainings, enforcement mechanisms and suitable shelters for victims, and better coordination with NGOs". She concluded by saying, "we need better awareness, medical care and return support for victims."

Giving a stronger role to women is a promotion of gender equality which, as a result, strongly contributes to better and more peaceful societies that are less prone to the threats posed by trafficking in persons and exploitation in all its forms. Shifting the paradigm from women as victims, to women as powerful agents of change, be it at the institutional or civil society level thus became another central theme of the event.

In her video address, Hosna Jalil, Deputy Minister of the Interior in Afghanistan, outlined the concerted efforts undertaken by the Government of Afghanistan to strengthen female representation in law enforcement agencies at national and local level. She explained how projects such as GLO.ACT Asia and the Middle East are essential to build the capacity of agencies tasked with addressing human trafficking.

Throughout the event, it became clear that to effectively address, prevent and respond to human trafficking, especially in times of conflict, governments and civil society must understand the dynamics created by conflict, leaving no one behind. Elizabeth Collett, IOM Special Adviser to the Director General, outlined the key work IOM does on strengthening trafficking in persons identification and assistance mechanism in complex settings.

Drawing on personal experience, Aimée Comrie, UNODC, Project Coordinator, GLO.ACT Asia and the Middle East spoke about the difficulty to identify the perpetrator in conflict situations, where the governing structure may be unstable or entirely collapsed, and rule of law may be absent. However, she went on to say that, despite the challenges, "we can, and we are doing better when addressing trafficking in persons in conflict situations."

Speaking about UNODC's work, especially the work undertaken under GLO.ACT, she explained that what we can work on is improving the quality of investigations and prosecutions, diversifying the evidence base beyond victim testimony and to look at forensic, financial and leadership analysis.  Ms. Comrie also announced that UNODC, under the framework of GLO.ACT, will be creating a Women's Network which will foster and promote the participation of women in the criminal justice response to trafficking in persons.