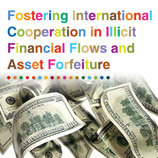 Pretoria (South Africa), 4 December 2019 - It is estimated that from 1970 to 2008 Africa lost about US$ 854 billion in illicit financial flows (IFFs) and continues to lose US$50 - 148 billion every year  [1]. The increased scale of IFFs leaving the African continent significantly undermines Governments' efforts to achieve the Sustainable Development Goals by 2030.

It is against this background that the United Nations Office on Drugs and Crime (UNODC) Regional Office for Southern Africa, in partnership with the Southern African Development Community (SADC) organised a three-day workshop on "Fostering International Cooperation in addressing Illicit Financial Flows and on Asset Forfeiture" from 20 to 22 November in Pretoria, South Africa.

This first ever workshop on IFFs in the SADC Region brought together operational officers from SADC member states representing anti-corruption agencies (ACA), asset forfeiture units (AFU) and Financial Intelligence Units (FIU), as well as experts from Brazil, the United Kingdom and the United States.

Key challenges that national authorities face in addressing IFFs emerged during the events' discussions. These include lack of coordination among national stakeholders involved in combating IFFs and subsequent duplication of functions; loopholes in existing legislation with respect to emerging crimes such as Cybercrime; and lack of capacity in specialised financial investigation skills and limited resources for asset management.

According to the Asset Recovery Informal Network in Southern Africa (ARINSA), an initiative supported by UNODC, over the last 10 years ARINSA members reported 1,126 money laundering investigations and 407 cases in which assets were seized or frozen. Overall, ARINSA members have confiscated USD 1.4 billion worth of proceeds of crime from 2009 up to now.

The meeting was officiated by Ben Llyewellyn-Jones, UK Deputy High Commissioner, who highlighted the importance of considering IFFs as a key impediment to sustainable development. He emphasized the commitment of the UK Government to support cooperation in such an important area.

UNODC Regional Representative for Southern Africa, Zhuldyz Akisheva said that "the UN Convention against Transnational Organised Crime and the UN Convention against Corruption combat IFFs through their money laundering and asset recovery provisions, amongst others." She further noted that these international instruments together with SADC Protocol against Corruption and ongoing initiatives, such as the Asset Recovery Inter-Agency Network for Southern Africa (ARINSA) and the Fast-Tracking of UNCAC implementation initiative, provide a framework to enhance cooperation among FIUs and other relevant national agencies.

Having highlighted challenges in addressing IFFs in the SADC Region Ipyana Musopole, SADC Representative, emphasized the need to counter IFFs for the SADC to meet its development goals.  He expressed appreciation to UNODC for the excellent level of cooperation with SADC under the joint UNODC-SADC Regional Programme and requested to strengthen the work on IFFs under this Programme.

Participants developed recommendations which called for support in increasing knowledge and skills of operational officers and the establishment of transparent illicit assets management mechanisms. They also called for procedures for re-distribution of seized assets to reinforce capacities of relevant national agencies, as well as to assist specific empowerment programmes for victims of crime and for broader development initiatives.

[1] By the United Nations Economic Commission for Africa