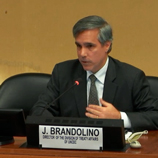 26 February 2019 - The United Nations Office on Drugs and Crime (UNODC) expressed its full support for the elaboration of a new General Recommendation on trafficking in women and girls in the context of global migration during a discussion on 22 February, held in the context of the 72 nd Committee on the Elimination of Discrimination against Women (CEDAW) in Geneva from 18 February to 8 March.

In a keynote speech at the meeting, the Director of UNODC's Division for Treaty Affairs John Brandolino outlined a number of key points to consider for the General Recommendation. He acknowledged that many States have considerably strengthened their efforts to prevent and prosecute trafficking in persons, and to identify, protect and assist female victims.

However, he also pointed out that areas with weak rule of law still provide ideal circumstances for traffickers and much more remains to be done to identify and protect women and children en route who are at risk of sexual exploitation and trafficking.

"We hope that the General Recommendation on trafficking of women and girls in the context of global migration will assist States in providing a holistic, multidisciplinary approach to counter trafficking in persons in a human rights-based, gender and age-responsive way," he said.

The aim of the General Recommendation will be to provide guidance to States parties to the Convention on the Elimination of All Forms of Discrimination against Women on the measures they should adopt to ensure full compliance with their obligations to respect, protect and fulfil women's human rights in the context of trafficking and global migration.

For the latest about UNODC's work on Human Trafficking and Migrant Smuggling, follow @UNODC and @UNODC_HTMSS.