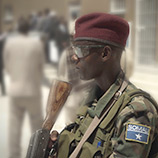 Mogadishu, 25 February 2019 - The United Nations Office on Drugs and Crime (UNODC) marked another milestone in its support to Somalia with the inauguration of the Mogadishu Prison and Court Complex (MPCC), a key part of the Federal Government's response to terrorism and one of the largest construction projects ever undertaken in the country.

Since 2010 UNODC's Regional Office for Eastern Africa has been working in the most challenging locations around Somalia to deliver both the infrastructure and the technical assistance to help the Federal and regional authorities deliver justice for those accused of piracy, terrorism and other forms of serious organised crime.

"Justice is an essential enabler to development and prosperity, and UNODC is proud to have made this contribution to the future of this country and its people," said UNODC Executive Director Yury Fedotov. "UNODC's work with Somalia will support efforts to promote peace, justice and strong institutions, in line with the Sustainable Development Goals."

Improving rule of law in post conflict states is complex and requires multi-pronged and comprehensive responses. Enhancing capacities is part of the building blocks of a response, but to do so, judges and prosecutors also need a safe and secure environment in which to conduct fair and efficient trials, and prison staff and the prisoners in their care need a humane and secure environment in which to live and work.

Speaking at Saturday's inauguration, Ahmed Ali Dahir, Attorney General of the Federal Republic of Somalia said: "The MPCC will help my prosecutors and the Judiciary of Somalia deliver fair and efficient trials in a safe modern environment. Delivering justice in the circumstances of Mogadishu is challenging work but what we have done at MPCC with UNODC will help greatly."

Prison Commissioner General Mohamed Jama Bashir noted that "The Federal Government is seeking to rebuild its judicial and custodial system to tackle serious crime and terrorism. The MPCC is the centre piece of that effort and we are grateful to UNODC who have been with us every step of the way through the project."

"While the whole site will be owned and managed by the Somali Ministry of Justice, experts from UNODC will continue to offer sustained support with the Judiciary, Prosecution Service and Custodial Corps for years to come. Simulated trials, training of prison staff and vocational training for prisoners will be at the heart of our support."

The Somali Federal Government selected UNODC's Global Maritime Crime Programme (GMCP) to implement this project based on its success delivering three other prisons in the Somali regions. With funding from Denmark, Netherlands and United Kingdom, UNODC and its implementing partner UNOPS will deliver a total of 1,000 new prison spaces, two new courtrooms connected by tunnel to the prison to reduce the risk of escape, and the facilities to allow witnesses to give evidence in terrorism trials by video link. Assassination of prosecutors and judges is a constant threat and therefore, the MPCC includes accommodation for up to 12 judges and prosecutors to remain on the site for the duration of the trials.

UNODC's commitment to Somalia is not only in the corrections and justice sector, with the GMCP and other UNODC regionally-driven programmes also working to provide the Federal Government with the technical skills to tackle irregular migration through the European Union's Better Managed Migration Programme and to tackle maritime crime, including the illicit charcoal trade through the Danish Government's Peace and Stability Programme.

Alan Cole, Head of UNODC's GMCP said: "Today we have personnel working in the prisons in Hargeisa and Garowe and the maritime law enforcement units in Mogadishu, Bosasso and Berbera. Our determination to be alongside our Somali partners at the front line of justice speaks for itself."