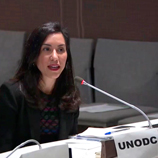 11 June 2019 - The United Nations Office on Drugs and Crime (UNODC) launched a Roadmap on the Treatment of Children Associated with Terrorist and Violent Extremist Groups on 7 June at UN Headquarters in New York.

Reflecting four years of UNODC's technical assistance work around the world, the Roadmap contains condensed guidance regarding three interconnected areas of work: prevention, rehabilitation and reintegration, and justice for children in the context of counter-terrorism.

The Roadmap is based on the UNODC training package on this topic, composed of the UNODC Handbook on Children Recruited and Exploited by terrorist and Violent Extremist Groups: The Role of the Justice System and its three 'Training Manuals'.

The Roadmap seeks above all to highlight a coherent system-wide approach based on combining effective prevention of, and responses to, violence perpetrated against children, while at the same time protecting society from the threats associated with terrorism and violent extremism, such as the current wave of returning foreign terrorist fighters.

During the High-level panel, Ambassador Koro Bessho, Permanent Representative of Japan to the UN, expressed willingness to continue the cooperation with UNODC, and reminded that "launching the Roadmap is just the beginning; we need to implement it and implement at the local level. That is of the utmost importance."

When referring to the phenomenon of child involvement with terrorist and violent extremist groups as a serious form of violence against children, Alya Ahmed bin Saif Al-Thani, Permanent Representative of Qatar to the UN, stressed that "we cannot ignore the high cost associated with this phenomenon in terms of the obstacle it represents to human, social and economic development and its serious consequences for promoting peace and security."

In his remarks, Judge Raja AbiNader, Head of the Prison Administration, Ministry of Justice of Lebanon, talked about the UNODC initiative in Lebanon aimed to promote the rehabilitation and disengagement from violence of children accused of terrorism. He said that he "was convinced that you cannot rehabilitate a person involved in terrorism, but the efforts deployed by UNODC in this context proved me wrong."

Participants discussed the obstacles faced by Member States on this matter, while raising awareness on the role of key actors for promoting the rehabilitation and reintegration of these children, in particular those who have been deprived of their liberty and affected by the Foreign Terrorist Fighters phenomenon. The event also served to gather political support from UN Member States, who expressed an interest in setting common goals and in implementing measures with the ultimate objective of tackling this issue in a cooperative manner.

Tijjani Muhammad-Bande, Permanent Representative of Nigeria to the UN, mentioned Nigeria's efforts in promoting the rehabilitation and reintegration of children involved with armed groups and reiterated Nigeria's strong commitment to promote the Roadmap and "to ensure that children, especially girls, are protected from armed conflict as well as conflict related sexual and gender-based violence."

Marc Pecsteen, Permanent Representative of Belgium to the UN, stressed the challenges countries are facing in relation to children affected by the foreign terrorist fighters phenomenon. He called upon the criminalization of use of children by terrorist groups, the need to always integrate child rights into security policies and to ensure that deprivation of liberty is used only as a measure of last report.

Alexandra Martins, the Coordinator of the UNODC Global Programme on Violence against Children, stressed the urgent need to overcome the perceived dichotomy between preserving public safety and protecting child rights and called upon the international community to adopt a common approach to address the problem. She said: "there is an urgent need to change the paradigm and to stop being guided by fear".

Representatives of a number of countries, UN entities and civil society organisations took part in this meeting. The Governments of Belgium, Canada, Japan, Nigeria and Qatar co-sponsored the High-level event which was chaired by Ms. Simone Monasebian, UNODC Representative in NY.

Recording of the High-Level event