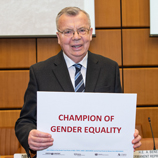 Vienna, 8 March 2019 - On the occasion of International Women's Day, Heads of the Vienna-based United Nations organizations and International Gender Champions met to discuss how men can play an active role in promoting gender equality.

"There is widespread recognition that gender inequality and related social ills and imbalances, from discrimination and the gender pay gap to women and girls being subjected to violence, harm us all," said Yury Fedotov, Executive Director of the UN Office on Drugs and Crime (UNODC) and Director-General of the UN Office at Vienna (UNOV). "Despite the progress made, gender equality is still far from becoming a reality in many areas of our lives," he said.

Mr. Fedotov emphasized that everyone needs to get involved in advancing gender equality, challenge their assumptions and overcome unconscious biases. He highlighted the UNOV/UNODC Strategy for Gender Equality and the Empowerment of Women for 2018 to 2021 that aims to ensure that gender equality and the empowerment of women are integral parts of all aspects of the work of UNOV/UNODC. This strategy was also recognized in the Global Health 50/50 Report, officially released on 7 March.

Executive Secretary of the Preparatory Commission for the Comprehensive Nuclear-Test-Ban Treaty Organization (CTBTO) Lassina Zerbo highlighted the importance of inviting more women to take leading roles. He pointed out that "Planet 50/50 will immensely benefit humanity as a whole. And for this we need to make additional efforts."

The event also featured a panel discussion that included Ambassador Alicia Buenrostro Massieu of Mexico and Ambassador Brendon Hammer of Australia. The latter highlighted that studies show that gender equality is a powerful driver for economic growth. Ambassador Buenrostro Massieu spoke about how men should seek dialogues on gender equality issues by asking women about their experiences and ideas, and questioning assumptions held by themselves and other male colleagues.

The event "Men as Champions of Gender Equality" was held on 7 March in Vienna and was organized by the Vienna Chapter of the International Gender Champions and the Gender Focal Points of CTBTO, IAEA, UNIDO, UNOV/UNODC and the Focal Points for Women from UNOV/UNODC. The panel discussion was moderated by Ambassador Andrej Benedejčič of Slovenia, and featured Matt Wallaert as Guest speaker.

UNODC's work on gender equality and the empowerment of women

UNOV/UNODC Strategy for Gender Equality and the Empowerment of Women