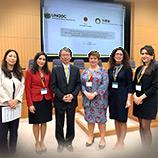 26 March 2019 - The United Nations Office on Drugs and Crime (UNODC) and the Government of Japan gathered representatives from Asia, the Middle-East and North Africa in Tokyo from 12 to 14 March, to present three training manuals on the treatment of children recruited and exploited by terrorist and violent extremist groups.

The manuals complement the UNODC Handbook, the first United Nations publication offering international guidance on design of coherent and effective policies for the prevention and treatment of these children, based on the in-depth analysis of relevant international law. Since 2015, UNODC has been providing technical assistance to support over 20 countries in different regions of the world addressing this urgent and complex phenomenon.

In the past years, thousands of children have been recruited by terrorist groups, and exploited in different roles, as suicide bombers, sexual slaves, informants. With violent extremist propaganda heavily relying on images of children being normalised and used to perpetrate violence, this issue has come to the forefront of the international agenda.

Nowadays, with the Islamic State in Iraq and the Levant (ISIL/Da'esh) losing ground, many of these children are held in camps in Syria and Iraq. Among them, there are also foreign children, many born in formerly ISIL controlled territory from foreign parents who had joined the group.  Facing such difficult circumstances, countries are struggling to find the appropriate response to the treatment of those children.

The workshop in Tokyo was an initiative under the UNODC Global Programme to End Violence against Children, funded and co-organised by the Government of Japan. "Understanding different cultures and showing generosity to end conflict is core to Japan's approach to development assistance" said H.E. Eiji Yamamoto, Ambassador in charge of International Cooperation for Countering Terrorism and International Organized Crime of Japan."

The event saw the participation of delegations from Bangladesh, Iraq, Lebanon, Maldives, Morocco, Nepal, Philippines, Sri Lanka and Tunisia, who took part in active discussions, training exercises and presented promising practices to overcome the challenges associated with the phenomenon.  Participants also heard the direct testimonies of children through the screening of "Ashbal - Lion Cubs of ISIL", a documentary that explores the experiences of former child recruits, who escaped the group. "These children want to be children again" said François-Xavier Trégan, the movie director, but "there was no help to be found for them to address the trauma they have been through".

Finally, the nine delegations contributed to the elaboration of a "UNODC Roadmap for action". This document, which integrates UNODC's approach and greatly benefitted from the delegates' experience, will serve to direct future UNODC's engagement in this area.

With renewed emphasis on the need to focus on the prevention of child recruitment, the Roadmap also emphasizes investment in rehabilitation and reintegration of these children as a priority. In particular, reintegration programmes should be based on an individualised approach, and include a focus on trauma-informed care, as well as on peacebuilding and reconciliation efforts.

Building on its dual mandate on violence against children and counter-terrorism, UNODC is ideally positioned to work on this issue.  "Children associated with terrorist groups are primarily victims of recruitment by these groups, a serious form of violence against children: there is no dichotomy between security interests and the protection of those children. UNODC reiterated its readiness to continue supporting countries in pursuing the complementary objectives of preserving public safety and protecting children", said Alexandra Martins, the UNODC representative. In concluding the meeting, Japan announced its continued financial support to UNODC in this area, alongside Austria, Canada, Germany, Sweden and Switzerland.