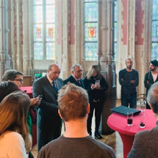 2 May 2019 - Diversity, inclusion, tolerance and integration are core values of the United Nations, but translating them into action to address terrorism and violent extremism is challenging. One possible way is through the exchange of best practices.

With this in mind the United Nations Office on Drugs and Crime (UNODC) and the city of Mechelen, Belgium, organized a study visit of an Iraqi delegation to Mechelen from 18 to 20 March 2019, to enhance the officials' capacities to address crisis situations, counter terrorism, and prevent violent extremism by learning from successful experiences.

Mechelen's population is made up of 138 nationalities speaking 69 languages. It was chosen for the study visit because of its successful efforts of using diversity and multicultural integration to benefit the community and address potential threats of terrorism and violent extremism.

While there were 565 Foreign Terrorist Fighters from Belgium, not one was recruited from Mechelen. This is also due to the efforts made by the town's population under the leadership of its Mayor, Bart Somers, who received the World Mayor Prize by the City Mayors Foundation in 2016 for his successful approach towards diversity and integration.

The Iraqi visitors met Mr Somers and discussed the Mechelen project "Police and Human Rights" . When speaking on the role of the police to promote security cooperation through integration and diversity, Mr Somers said that "police need to be a mirror of society where 25 or 30 per cent of the people in uniform are people from a foreign background." He said this was important both because it strengthens the information gathering process about what is really happening in society, and because it creates trust between the people, the city, and the police.

Mr Somers said that "the approach to fighting crime in Mechelen is seen primarily as a social policy, where the society must be engaged, and secondly, we never use our police to criminalise groups in society."

The three-day study tour included visits to different departments of the Mechelen Local Police, where police officers showcased the community-based police approach towards the town's citizens. They stressed the importance of building bridges between the community, and showcased examples of effective actions for integration, social inclusion and education.

The delegates from Iraq also visited the Coordination Unit for Threat Assessment (CUTA), where the Centre's role in assessing the terrorist threat in Belgium, its structure and the way it collaborates with local authorities was explained. They also heard from the Flemish Organization for Cities on its socio-preventive projects in the field of violent extremism prevention, and were shown the Kazerne Dossin Holocaust Memorial.

By the end of the visit, a set of recommendations was formulated to identify ways to replicate the Mechelen experience in selected municipalities in Iraq. Cristina Albertin, the UNODC Regional Representative for Middle East and North Africa, and the UNODC Regional Advisor on Terrorism Prevention, Ali Younes, accompanied the Iraqi delegation. The study visit was funded by the Government of Japan.