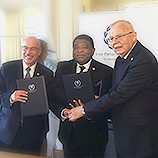 The signing took place at the House of Parliaments in Geneva on 8 May between the executive heads of the organizations: IPU Secretary General Martin Chungong; UNOCT Under-Secretary-General Vladimir Voronkov; and UNODC Executive Director Yury Fedotov. The ceremony was attended by the Director-General of the United Nations Office at Geneva, Michael Møller, and the Speaker of the UAE Parliament and member of the IPU High-Level Advisory Group on Countering Terrorism and Violent Extremism, Dr Amal Al Quabaisi.

The memorandum will provide a framework for cooperation between the IPU and the UN to promote the role of parliaments in addressing terrorism and conditions conducive to terrorism, contributing to the implementation of the United Nations Global Counter-Terrorism Strategy.

At the event, the IPU Secretary General also signed the United Nations Global Counter-Terrorism Coordination Compact to further reinforce links between the organizations.

The IPU, UNODC and UNOCT have worked together under a five-year Joint Programme on Countering Terrorism and Violent Extremism Conducive to Terrorism since 2017 to help parliaments implement IPU resolutions, international conventions, protocols and UN Security Council resolutions related to terrorism. The Joint Programme also facilitates cooperation among parliaments through sharing good practices and lessons learned as well as by providing parliaments with the necessary technical assistance and dedicated tools.

The work of the Joint Programme will be supported by the IPU's  High-Level Advisory Group on Countering Terrorism and Violent Extremism.

Countering terrorism and extremism conducive to violence also featured prominently in discussions at the recent IPU 140 th Assembly in Doha, Qatar, with the announcement that the UNOCT will provide over USD2.1 million from its Trust Fund to support parliamentary action against terrorism. Qatar is one the main donors to the UNOCT managed Trust Fund on Counter-Terrorism, supporting its coordination mandate as well as key thematic and innovative technical assistance projects.