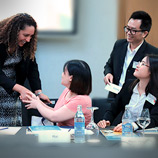 Bangkok (Thailand), 28 November 2019 - Senior drug policy and health practitioners from Southeast Asia gathered in Bangkok to participate in a regional policy forum and seminar on synthetic drug use and harm reduction services organised by the United Nations Office on Drugs and Crime (UNODC) and UNAIDS.

It is estimated that 60 per cent of the more than 35 million people who use synthetic drugs - particularly the stimulant methamphetamine - worldwide are living in the Asia-Pacific region. At the same time, there has been a dramatic change in the East and South-East Asia drug market, with traditional opiates including heroin in decline, and synthetic drugs including methamphetamine and ketamine sharply increasing.

Alarmingly, the most recent UN Transnational Organised Crime Threat Assessment for the region has found that the value of the illicit methamphetamine market has expanded by four times in the last six years and is now estimated to be worth up to US$ 61.4 billion annually. The scale of the problem has resulted in increasing calls for a new approach to drug policy with a focus on addressing the health and social consequences of synthetic drug use.

UNODC Regional Representative for Southeast Asia and the Pacific, Jeremy Douglas, opened the forum remarking that the synthetic drug market in the region has expanded for years in-part because demand, health and social harms have received so little policy focus and investment: "The approach of addressing the problem almost exclusively by trying to reduce supply through seizures has not worked, but at least policy makers in the region are now reflecting on what this means and are discussing and debating different approaches, and some governments are considering strategies that include emphasis on preventive measures - the kind of governance changes necessary are not going to be easily or quickly implemented, but we will support the region with advice and assistance."

Earlier this year UNODC, UNAIDS and WHO launched a Technical Guide on HIV Prevention, Treatment, Care and Support for People Who Use Stimulant Drugs with an accompanying training package for countries to use. Monica Ciupagea, UNODC Drug Use and HIV Expert, was involved and commented: "The seminar this week will provide guidance to help establish and expand access to prevention, treatment, care and support services which are lacking for people who use synthetic stimulant drugs." She added, "They are rarely injected like heroin, but users are still at risk of exposure to HIV and other diseases from different high risk behaviours."

The package to address the risks associated with stimulant drug use includes promotion of harm reduction efforts to prevent HIV and other related communicable diseases. For example, people smoking crystal methamphetamine often share pipes and would benefit from having personal smoking equipment, as well as messaging that sharing pipes significantly increases the risk of transmitting Hepatitis C or tuberculosis.

Information on risks associated with changes in the drug market to synthetic drugs like methamphetamine remains limited, and harm reduction and treatment services have yet to catch-up. Tailored prevention services are being discussed to reach key populations that are disproportionately affected by HIV/AIDS including prisoners, sex workers, men who have sex with men and transgender people. Regional Representative Douglas remarked, "Despite the challenge - which is certainly large and still appears to be expanding - it is good that governments are here and are starting to look at expanding treatment and harm reduction services for key vulnerable populations."

UNODC Regional Programme for Southeast Asia and the Pacific

Drug use and HIV programming

Drug use treatment and reintegration

Treatment Of Stimulant Use Disorders: Current Practices And Promising Perspectives