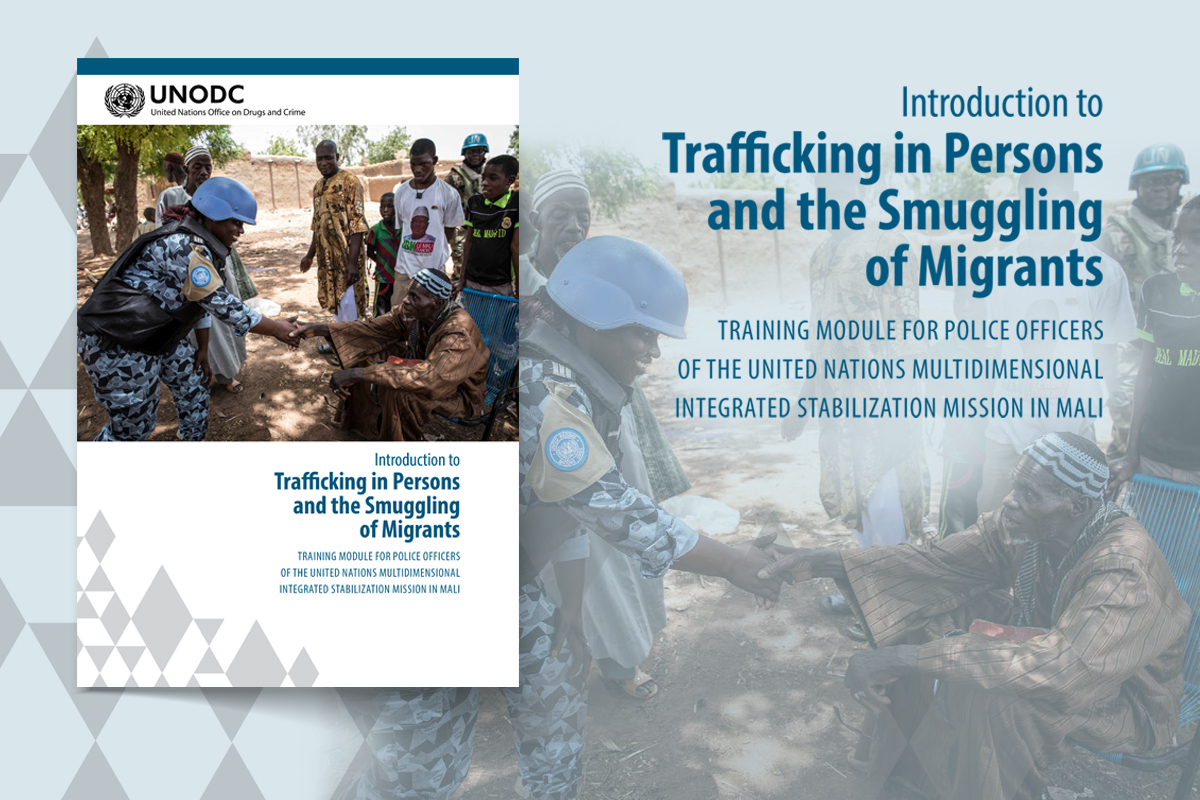 Mali, 16 April 2020 - In Mali, action against human trafficking and smuggling has strengthened following the cooperation of the United Nations Office on Drugs and Crime (UNODC) with the UN’s Department of Peace Operations (DPO) and the training of UN police officers deployed under the UN Multidimensional Integrated Stabilization Mission (MINUSMA).

Most importantly and as a result of this cooperation, victims are saved: for example, one of the trained UN police officers supported Malian police units in 2019 to rescue Guinean women exploited in prostitution in Mali after they had been lured with job offers in hair salons or supermarkets.

In order to support MINUSMA in carrying out its mission, UNODC partnered with DPO and the Police component of MINUSMA to help UN police officers better understand how trafficking and smuggling manifest and affect civilians in Mali.

Marking the completion of this pilot project, UNODC published today the Training Manual developed with DPO and MINUSMA to support the training. On this occasion, John Brandolino, Director, Division for Treaty Affairs, UNODC, said: “We welcome this training effort and the results achieved as a milestone in UN’s response to support war affected states. Threats associated to trafficking and smuggling are exacerbated by conflict, and call for resolute and robust action. UNODC worked closely with the Department of Peace Operations in Mali and stands ready to replicate this pilot intervention in other countries, in response to the mandates given by the Security Council”.

Mark Pedersen, Chief, Integrated Training Service, DPO, stated: “We recognize the work to integrate this mission-specific training module into the induction training of our mission in Mali, and the assistance towards the training of the police officers that are to deliver the session, using practical scenario-based exercises and case studies. The lessons learned will enhance the work of MINUSMA UNPOL in this area and the support being given to the host state in protecting and addressing the needs of trafficking victims and smuggled migrants. “

The pilot project and the publication of the Manual were made possible with the financial support of the Government of Switzerland.

Introduction to Trafficking in Persons and the Smuggling of Migrants: TRAINING MODULE FOR POLICE OFFICERS OF THE UNITED NATIONS MULTIDIMENSIONAL INTEGRATED STABILIZATION MISSION IN MALI