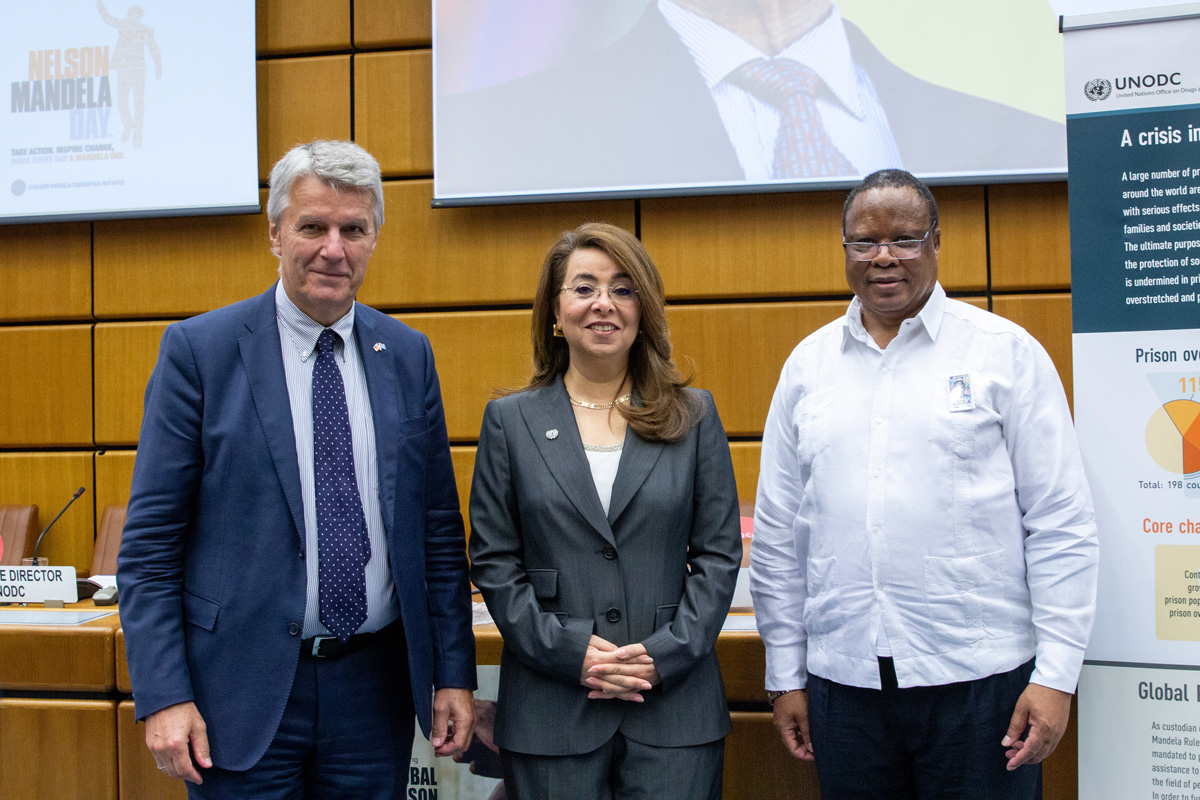 22 July 2020 – At the occasion of Nelson Mandela International Day, which honors the outstanding contribution of the former South African President to humankind and remembers the 27 years he was deprived of his liberty, Member States and the UN Office on Drugs and Crime (UNODC) joined forces in reiterating their commitment to the UN Standard Minimum Rules for the Treatment of Prisoners, known as the Nelson Mandela Rules, as the internationally recognized minimum standard for prison management.

Prison settings, where physical distancing is often not an option, have been hit particularly hard by COVID-19 and are at a severe risk of suffering from explosive outbreaks of the disease. This vulnerability is aggravated by the weaker health profile of prison populations, poor prison conditions and prison overcrowding, which continues to affect a solid majority of countries worldwide. Despite efforts to prevent the spread of COVID-19 in prison facilities, at least 100,000 prisoners as well as officers in more than 80 countries have become infected. As a result of the restrictions imposed on the regular prison regime, adding to the anxiety and fear caused by COVID-19, tension has been growing in prisons, as evidenced by demonstrations and prison riots in more than 40 countries.

In light of the above, the Vienna-based Group of Friends of the Nelson Mandela Rules - a group of more than 30 like-minded Member States – convened its first virtual meeting on 17 July to renew its pledge to the Nelson Mandela Rules during these critical times. The meeting was attended by representatives from more than 50 States, UNODC’s Executive Director, Ms. Ghada Waly, the Honorable Minister of Justice and Correctional Services of South Africa, Mr. Ronald Lamola, as well as UNODC staff from across the globe.

In her keynote intervention, Ms. Waly emphasized that “UNODC is proud to be the custodian of the UN Standard Minimum Rules for the Treatment of Prisoners, and we continue to be inspired by Nelson Mandela’s life and legacy in our efforts for the humane treatment of prisoners and their reintegration into our societies. COVID-19 has brought home the hard truth that poor prison conditions, overcrowding and a lack of resources pose serious threats to not only the health of 11 million people in prisons worldwide, but also to communities outside.” The two Co-Chairs of the Group, Ambassador Gerhard Küntzle (Germany) and Ambassador Rapulane Molekane (South Africa), concurred with this notion. Ambassador Gerhard Küntzle emphasized that “overcrowded prisons are potential hotspots for COVID-19” and joined Ambassador Rapulane Molekane in calling upon Member States “to join forces in upholding the Nelson Mandela Rules as the core minimum standard for the humane treatment of prisoners.”

As custodian of the Nelson Mandela Rules, the UN Rules for the Treatment of Women Prisoners and Non-custodial Measures for Women Offenders (the Bangkok Rules) and other relevant standards and norms, UNODC has quickly responded to the emergency needs that arose in prisons by boosting hygiene, health and other essential services for prisoners  in more than 50 countries in Africa, Asia and the Americas. Its Position Paper on COVID-19 Preparedness and Responses in Prisons has been broadly disseminated in all UN languages, and complemented by webinars and in-depth educational material for prisoners, prison officers and health-care professionals. With 25,000 users from more than 90 countries, UNODC’s e-learning course on the Nelson Mandela Rules has developed into UNODC’s most popular on-line course, and received the 2019 Excellence Award by the International Corrections and Prison Association.

During the meeting, Ms. Miwa Kato, UNODC’s Director of the Division for Operations, emphasized that, beyond crucial emergency support to respond to COVID-19 in prisons, “the need to address overcrowding and its root causes should come out as one of our main lessons learned and priorities in terms of future reform efforts.”

COVID-19 has indeed sparked an unprecedented wave of prisoner releases in more than 100 countries, benefitting more than 600,000 prisoners according to available data, with a focus on individuals with pre-existing health conditions, those whose release would not result in compromising public safety, and those approaching the end of their sentence. Together with UN sister agencies, UNODC has advocated for and assisted in emergency release efforts to reduce populations in prisons and other closed settings, and also promoted efforts to sustain and firmly institutionalize a resort to non-custodial measures in suitable cases.

When presenting South Africa’s Correctional Services COVID-19 Disaster Management Response Strategy, which complements infection prevention and control measures with the envisaged release of 19,000 prisoners, Minister Lamola equally reminded participants of the need for a “paradigm shift in society” as regards negative attitudes towards former prisoners, which “would go a long way in reducing recidivism.” More broadly, he reiterated that South Africa had made it its mission to translate the Mandela Rules into a daily reality for prisoners.

During an inter-active discussion, Ambassadors and other representatives from the Permanent Missions of Afghanistan, Algeria, Costa Rica, Cuba, Fiji, Italy, Namibia, Portugal, Qatar, Sudan, the United Kingdom and Uruguay as well as a representative from the International Committee of the Red Cross took the floor to share their experience and to express their support for UNODC’s work in the field of prison reform, including its Global Programme on Addressing Prison Challenges.

Joint Statement on COVID-19 in Prisons and Other Closed Settings (UNODC, WHO, UNAIDS and OHCHR)