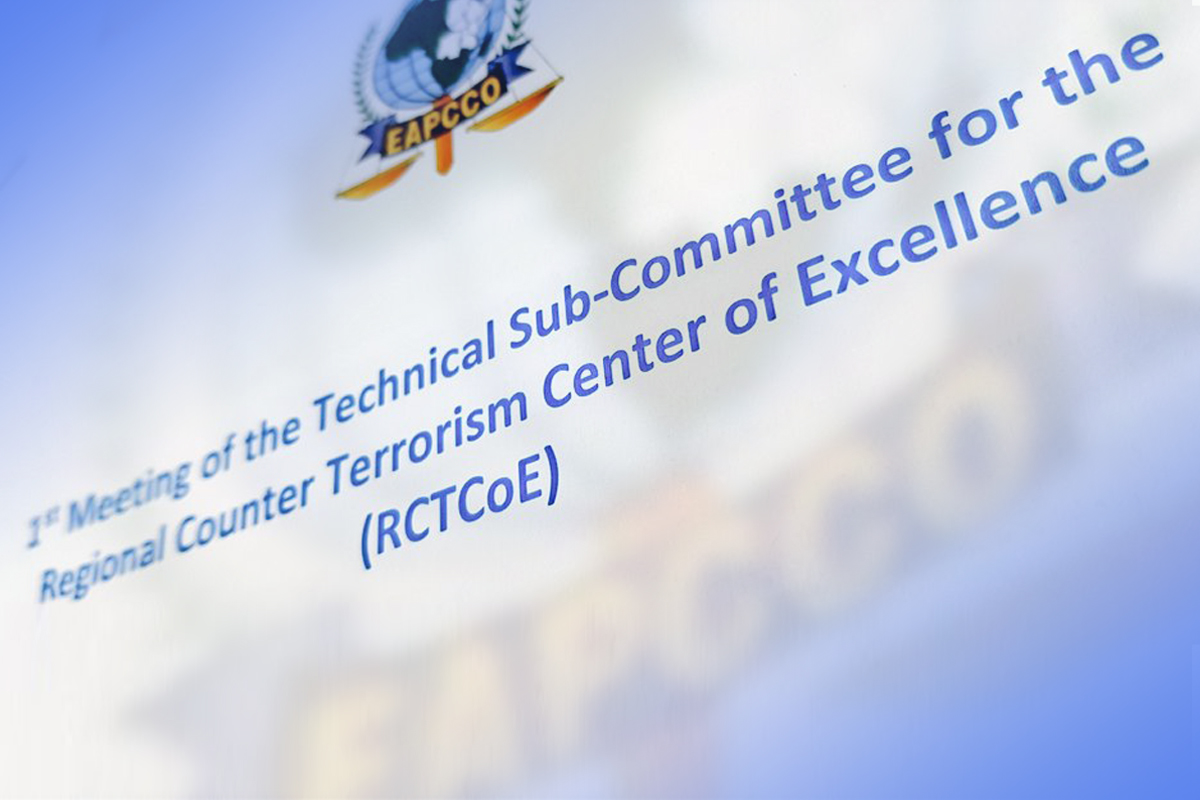 The regional project seeks to fully operationalise the Centre by strengthening its research and analysis capacity and output, and by supporting it to provide bilateral and regional capacity building to EAPCCO Member States.

Terrorism continues to pose a major threat to peace, security and development in Eastern Africa while undermining human rights of people across the region. Al-Qaida affiliate, Harakat Al-Shabaab Al-Mujahidin (Al-Shabaab), the Islamic State in the Levant (ISIL) in Somalia, Islamic State Central Africa Province (ISCAP) and Ansar Al Suuna in Mozambique, threaten Member States and people across the region and beyond any single country.

In response to these threats and needs identified by Member States in Eastern Africa, the EAPCCO Council of Police Chiefs in 2018 established the CTCoE with a mandate to ensure timely sharing of knowledge and information, coordinated planning and capacity building, and recommending best practices to Member States in countering terrorism and violent extremism in Eastern Africa.

UNODC has since been supporting the CTCoE in formulating its business plan, developing and commencing with a comprehensive regional training needs assessment for its Member States, and providing legal and technical advice on the operationalisation of the CTCoE.

“The pronouncement by the Chiefs of Police creating the EAPCCO Counter Terrorism Centre of Excellence came as no surprise”, said Sospether Munyi, Director of the CTCoE.  “The number of attacks in the Eastern Africa region by groups associating themselves with al-Qaeda and ISIL were on the rise and the threat levels were equally worrying.”

According to Director Munyi, the Centre would act as a think tank on counter-terrorism issues and would help to fight terrorism through timely sharing of actionable information, coordinated planning, capacity building and conduct research on topical issues to help inform policy regarding terrorism and violent extremism: “In this regard, Germany and the UNODC Regional Office for Eastern Africa, is providing much needed support since 2019 to help fully operationalize the Centre.”

The project will be implemented with three primary objectives: First, to assist the CTCoE to become a credible knowledge hub on violent extremism and terrorism in Eastern Africa through research initiatives, publications and a dedicated website to publish its material. Secondly, to enhance the knowledge and skills of individual police officers seconded to the CTCoE through mentoring and leaning opportunities. Finally, the project will support the CTCoE in providing advice and delivering capacity building activities to its Member States on countering violent extremism and terrorism in Eastern Africa.

According to Johan Kruger, Head of Transnational Organized Crime, Illicit Trafficking and Terrorism Programmes at the UNODC Regional Office for Eastern Africa, UNODC’s support to the CTCoE is based on a longstanding partnership and cooperation with EAPCCO in countering transnational organised crime and terrorism in Eastern Africa: “Regional entities have a critical role to play in preventing and countering terrorism. As such, UNODC commends EAPPCO for this commitment to jointly counter terrorism in the region. We gladly support this regional initiative not only because it is founded on strong regional ownership, but also as the project is designed around actual needs identified by Member States”.