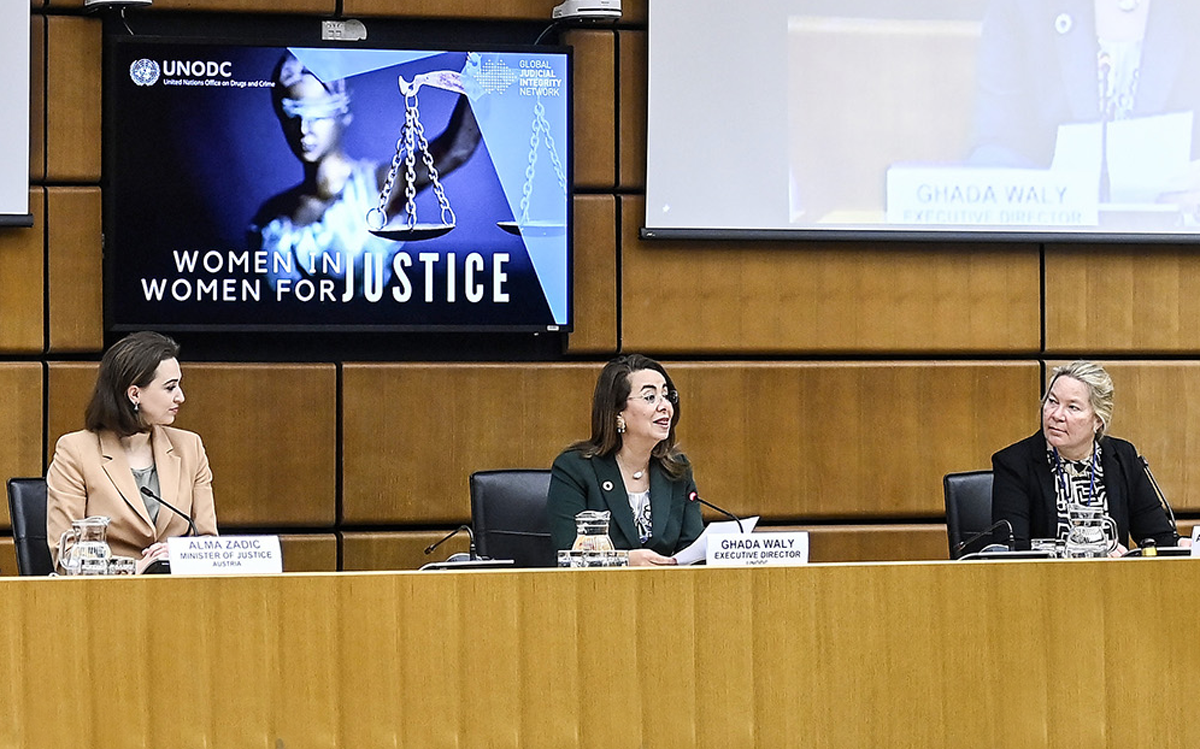 Vienna (Austria), 10 March 2022 – Ensuring fair gender representation strengthens the judiciary and its ability to deliver fair decisions. Women judges bring different perspectives and experiences, enhancing trust in the judiciary as capable of upholding the rule of law and human rights while reflecting the society it represents. Moreover, women in leadership roles counter corruption by helping to disrupt networks of collusion.

To draw attention to the role of women in creating a more equitable criminal justice system, the first-ever International Day of Women Judges was marked today with the launch of the Women in Justice/for Justice initiative, conceived to promote gender balance and gender responsiveness across the justice spectrum, via a high-level event in Vienna. Preceding this, on International Women’s Day 2022 (8 March), a virtual international forum brought judges together to discuss how to strengthen gender perspectives in the judiciary and measures to prevent violence.

The Women in Justice/for Justice campaign

Introducing the Women in Justice/for Justice initiative in a high-level session that was followed by a panel discussion on gender-responsive justice, the Executive Director of UNODC, Ms. Ghada Waly, said: “Today is a day to recognize the leadership of women judges in the pursuit of justice. It is an opportunity to celebrate champions for diversity and equality in the justice sector, both women and men, and to commit to more determined action to promote laws and institutions that protect and empower every one of us,” she added.

The Minister of Justice of Austria, Ms. Alma Zadić, encouraged women in the criminal justice system to realize roles as agents of change. “A diverse judiciary brings different voices and perspectives into the courtroom and beyond. Numerous studies prove that diversity strengthens the judiciary. It helps to overcome implicit biases and unconscious stereotypes. Above all, female judges have made groundbreaking decisions when it comes to combating all forms of discrimination,” Zadić went on to say.

If we are to hope for fair, effective and efficient criminal justice systems for all, they must respond to all – including by addressing women’s unique needs. The number of women and girls coming into contact with the criminal justice system, as victims, witnesses and perpetrators, has increased in the past 20 years.

Participants in today’s panel, gathered in-person in Vienna and online around the world, discussed how to distill these realities into calls to action that the Women in Justice/for Justice campaign will focus on. These include: improving the existing knowledge base to support criminal justice responses; filling gaps in data collection and analysis; improving delivery of justice; promoting integrity and accountability through gender representation and responsiveness; and addressing gender-based violence and the needs of women as witnesses and victims.

The Women in Justice/for Justice campaign is centred around awareness-raising on the role of women judges through exhibitions, social media and outreach to law schools, mentoring opportunities for female law school graduates and young judges, engagement with professional networks and associations, and targeted initiatives to encourage local participation in the campaign.

The International Forum with Judges

Along the same theme, participants in the International Forum with Judges on International Women’s Day, 8 March, shared examples of good judicial practice to avoid gender stereotyping, stop victim blaming and centre the specific needs and experiences of women in criminal justice responses.

One such example, the new UNODC Handbook for the Judiciary on Effective Criminal Justice Responses to Gender-based Violence against Women and Girls, is being used in Ecuador, Mexico, Nepal and Viet Nam to support an end to violence against women and to overcome barriers to women’s access to gender-responsive justice. Similarly, in Argentina, UNODC and its United Nations (UN) partners are working with civil society to end femicide by implementing strategic interventions that prevent violence, strengthen key institutions and ensure access to justice and holistic services for survivors.

The virtual forum was organized by UNODC, together with the Association of Women Judges of Argentina and the Council of the Magistracy of Argentina.

The UN General Assembly chose 10 March to be the International Day of Women Judges, two days after International Women’s Day. In a field where women have been historically underrepresented in many parts of the world, this observance is a milestone in global efforts to increase gender equality and women’s empowerment.

The General Assembly resolution noted with appreciation the work of UNODC’s Global Judicial Integrity Network ‘to incorporate women’s representation issues into judicial systems’. Since its inception in 2018, the network has addressed gender-related issues, such as sextortion, sexual harassment, sexual discrimination, gender bias, unequal gender representation and gender stereotyping, that affect judicial integrity. Among others, the network published a dedicated paper on gender-related judicial integrity issues in 2019. The establishment of this international day thus builds on these efforts.

UNODC’s efforts are driven by Sustainable Development Goal (SDG) 5 in the 2030 Agenda, which calls for progress towards gender equality and the empowerment of women and girls.