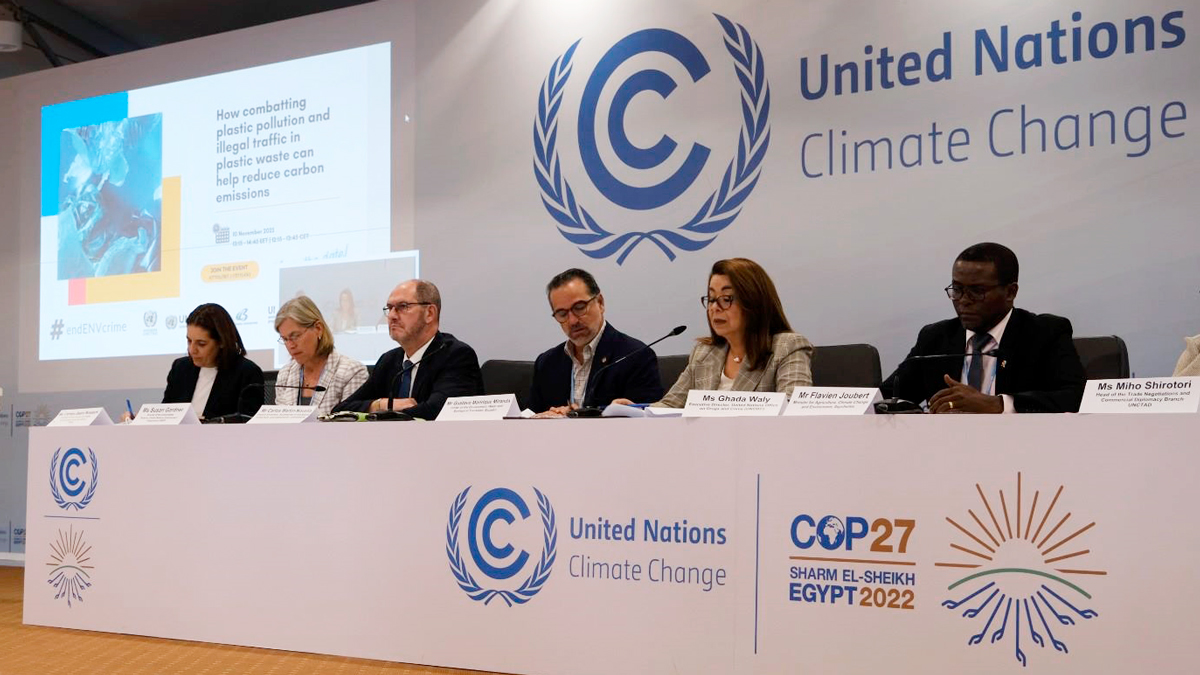 Sharm El-Sheikh (Egypt), 14 November 2022 – For the past week, the United Nations Office on Drugs and Crime (UNODC) has been attending the 27th Conference of the Parties of the United Nations Framework Convention on Climate Change (UNFCCC) (COP27) in Sharm El-Sheikh. The conference is the world’s largest annual gathering on climate action, in which solutions are sought to improve solidarity between countries in meeting the commitments laid out in the Paris Agreement.

One of the priority issues of this year’s COP27 Presidency, held by host country Egypt, is of waste management. Generating less waste, promoting environmentally-sound waste management, and controlling transboundary movements of hazardous and other waste and its illegal traffic are important means to help countries meet climate commitments, which are not currently on track to meet Paris Agreement goals.

On 17 November, Egypt will launch the global waste initiative ‘50 by 2050: For Africa for A Global Impact’ during COP27’s ’solutions day’. Noting that waste impacts all Sustainable Development Goals and is therefore a totemic issue for the achievement of the global goals, as well as the fight against climate change, the initiative sets the ambition to treat at least 50 per cent of waste produced in Africa by 2050.

In support of the 50 by 2050 initiative UNODC jointly held a high-level COP27 side event named ‘Unmanaged waste - a hidden cause of climate change’ on Friday, November 11. The event showed the value of how combating waste trafficking and supporting environmentally-sound waste management can contribute to reducing greenhouse gas emissions and promoting the circular economy as a climate mitigation strategy.

“Lack of environmental legislation and enforcement, coupled with financial disparities between countries, drives illegal trafficking of waste – and waste trafficking is a very big business,” said UNODC Executive Director Ghada Waly at the event. Ms. Waly highlighted UNODC’s efforts assisting Member States to address illegal traffic of waste, including capacity development initiatives like the Unwaste project to fight trafficking in waste between the European Union and Southeast Asian countries, and tools such as a recently launched legislative guide on combating waste trafficking.

On Thursday, November 10, UNODC co-organized another event focusing specifically on how to generate climate change mitigation solutions by addressing the world’s plastic waste problem. The event was titled ‘How combatting plastic pollution and illegal traffic in plastic waste can help reduce carbon emissions’.

“Today’s event serves as an example of UN entities joining forces to deliver targeted policy advice and effective technical assistance to member states,” Ms. Waly said during the side event. She added that international cooperation is especially important with respect to carrying out trade route investigations and mutual legal assistance, which can help disrupt the cross-border flow of illegal plastic waste.

COP27 will continue until 18 November. All themes for each day of negotiations can be found in the official programme. For more information, please click here for the UN Climate Change website or here for the site of the Egypt COP27 Presidency.

The session ‘How combatting plastic pollution and illegal traffic in plastic waste can help reduce carbon emissions’ was organized through a partnership between the UN Conference on Trade and Development, the UN Environment Programme (UNEP), and the Secretariat of the Basel, Rotterdam, and Stockholm Conventions (BRS Secretariat), along with the environment ministries of Ecuador, Indonesia and Seychelles, and the Commonwealth Secretariat.

The session ‘Unmanaged waste - a hidden cause of climate change’ was organized in partnership with UNEP, the BRS Secretariat, the environment ministries of Egypt and Ghana, and the European Union External Action Service

Click here to learn more about UNODC’s Global Programme on Crimes that Affect the Environment.