HIV and Prisons in sub-Saharan Africa:

28 November - Of any region in the world, sub-Saharan Africa is the hardest hit by the HIV epidemic with almost two-thirds of all people infected with HIV living in the region. The HIV epidemic has struck prisons and other places of detention around the world with particular severity. Penal institutions have grossly disproportionate rates of HIV infection and confirmed AIDS cases. International data show that HIV prevalence among prisoners is between two to fifty times higher than that of the general adult population.

About 668,000 men and women are incarcerated in sub-Saharan Africa. Data across sub-regions show that while southern African countries make up about 10 per cent of the total population of the region, they host one-third of the total prison population of the continent. This is also the part of world reporting a highest number of people affected by HIV.

The existing body of literature points to a number of contributing factors to HIV transmission in African prisons. These range from the high incarceration rates, poor criminal justice and judicial systems, social stigma, institutional and societal neglect, lack of resources for maintenance of existing penal institutions, poor food and nutrition, lack of health care, unsafe health services, overcrowding, mixing of un-sentenced and convicted persons, high-risk sexual and other behavior such as injecting drug use, tattooing and lack of conjugal visits.

Despite this and although there has been a significant increase in national and international funding to control the epidemic, prison settings in sub-Saharan Africa have received surprisingly or shockingly, little attention….to the extent that there is almost no reliable information on the magnitude of the issue.

All HIV concerned communities will find in this living document information and a way forward to address this most at-risk population: collect the evidences, reform the criminal justice and criminal laws, develop and implement comprehensive HIV/TB prevention care and treatment programmes in prison in Africa.

Prisoners are part of the community, people work in prison, others visit prisons, and most of the prisoners will leave prison. HIV in prisons is both a public health and a human rights issue that needs to be addressed urgently for an effective response to the epidemic in Africa.

UNODC, together with UNAIDS, and The World Bank invite other relevant organizations to join our efforts to build knowledge and raise awareness of the vulnerability of prison communities to HIV/AIDS in Africa as well as those in close contact with them.

Full text of the report (pdf).

HIV/AIDS in places of detention 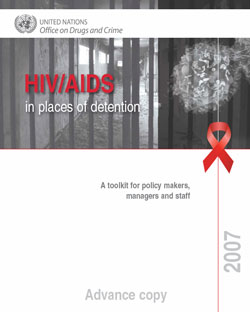 Worldwide, the levels of HIV infection among prison populations tend to be higher than in the populations outside prisons. This situation is often accompanied and exacerbated by high rates of other transmissible infections such as hepatitis B and C and tuberculosis.

In prison, the risk of transmission of HIV and other infections is increased. Prisons are frequently overcrowded. They are often characterised by an atmosphere of violence and fear. Even where sexual relations are forbidden, there is sex in prison. As within the community, despite the control measures implemented, illicit drugs are circulating.

There is strong evidence about what can be done in prisons to reduce the risk of HIV transmission and to provide adequate care, support, and treatment to prisoners living with HIV or AIDS, and there is growing awareness and widespread concern about HIV/AIDS in prisons.

In 2006, UNODC, UNAIDS, and WHO published a Framework for mounting effective national response to address HIV Prevention, treatment and care and support in prisons.

As a complement, this toolkit, on HIV/AIDS in prisons aims to provide information and guidance primarily to individuals and organisations with responsibilities for prisoners, and to people who work in and with prisons. In addition, it will assist everyone who has anything to do with prisons.

It is written for use primarily in low- and middle-income countries, but will be useful also for individuals and organisations in resource-rich countries. Its focus is on HIV/AIDS, but it recognises that other diseases - in particular hepatitis and tuberculosis - are linked to HIV/AIDS and also represent serious problems in prisons.

It is based on the requirements of international law and standards, scientific evidence and best practice experience. It complements a series of other documents produced by UN agencies, and refers to them, and to other documents, for additional information on HIV/AIDS in prisons.

It can also be complemented by other UNODC guidances material on criminal justice reforms that will also contribute to HIV prevention in prison settings, such as the Criminal Justice Assessment Toolkit and other related publications.

Advance copy of the toolkit (pdf).