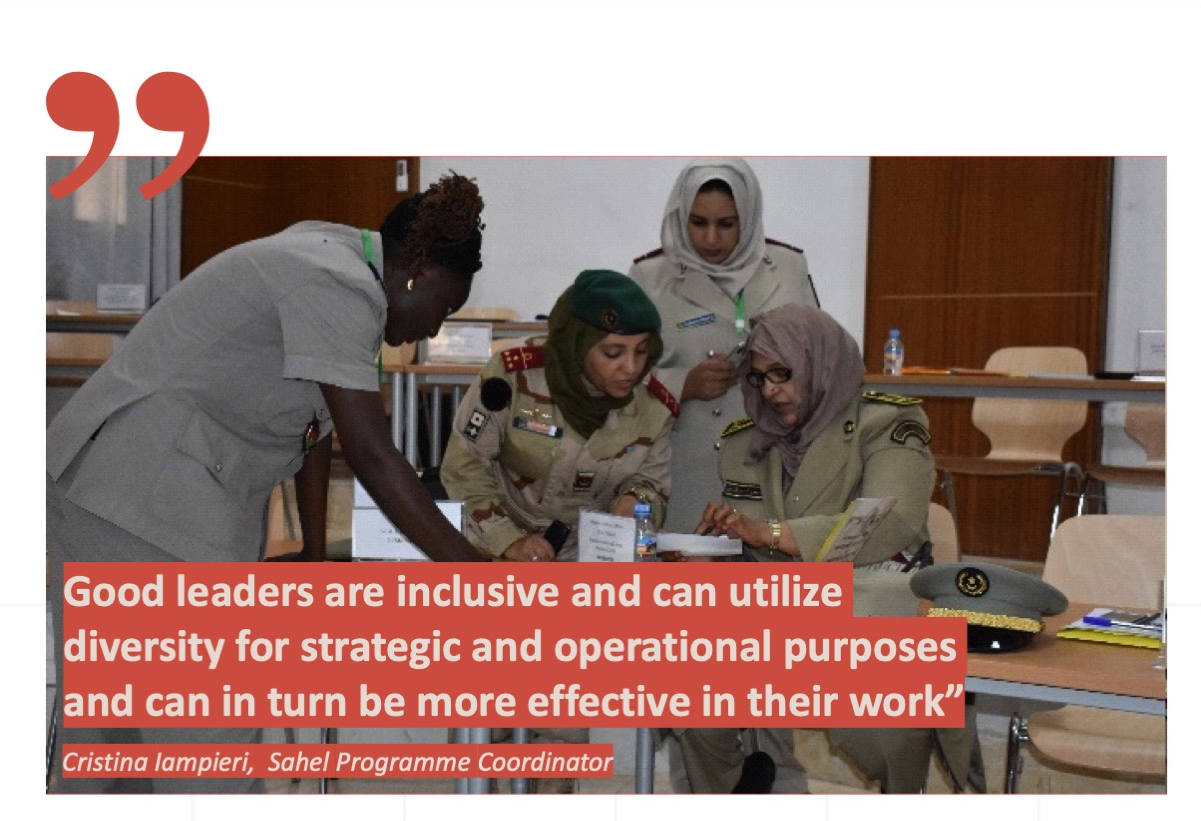 Vienna, September 2020 - The UNODC Sahel Programme supports the development of a more accessible, accountable and effective criminal justice system in the Sahel (Western and North-Central Africa). In order to address security challenges in the region, the inclusion of women has proven to be crucial. As recognized in UNSCR 1325 on Women, Peace and Security, women and girls are disproportionately impacted by armed conflict and should therefore be an integral part of conflict prevention and resolution. Despite global efforts to implement the Women, Peace and Security Agenda, women’s participation in the security sector remains low and this is also the case for the G5 Sahel Joint Force and its Police Component.

The UNODC supported the Bureau of Defense and Security of the G5 Sahel Programme in developing and operationalizing the police component of the Joint Force and was tasked with mainstreaming gender throughout the programme. We interviewed Cristina Iampieri, Sahel Programme Coordinator, on her work:

Gender Bulletin: Gender mainstreaming often seems to be a theoretical concept that is hard to translate into practical actions. What steps did you take to raise gender equality in a setting which is often skeptical of gender mainstreaming efforts?

Cristina Iampieri: The G5 already recognized the relevance of gender aspects in their work but this was mainly focusing on the protection of women and children, and nothing about actively including women as an active part of the forces providing security. It was a very one-dimensional concept mainly seeing women as victims.  The G5 Sahel Programme had very low participation of women as a result. Data showed that women represented only six percent of personnel in the police component and on the military side, zero percent.

Gender Bulletin: What was the “a-ha” moment when you realized there was a practical reason for promoting gender equality?

Cristina Iampieri: I talked with G5-Sahel soldiers at a battalion in Burkina Faso, who complained about not being able to carry out their operations successfully when working in all-men teams. They told me that every time they left their field camp to visit a village, somehow the villagers would know in advance that they were coming. Consequently, all the men would leave the village before the battalion arrived and only women and children remained. It made it impossible for the battalion to gather information as it was not possible for a foreign/strange man, and worse so for a soldier, to approach the women due to the cultural setting. The battalion would therefore have to write off many missions as unsuccessful.
On the other hand, had there been female soldiers in the battalion, they would have been able to speak with female villagers and gather crucial information. This proved to me that for operational reasons it is really important to include women. That goes for the strategic level as well. For instance, when planning operations, it is crucial to have women on the team to pick up on these issues as well as other security risks that hit women especially hard.

Gender Bulletin: This example really shows how important diversity is in order to carry out missions successfully. What challenges did you encounter in trying to implement the gender component?

Cristina Iampieri: The first challenge was to bring attention to the need to include women in the security sector. The second challenge was for them to actually do something to enhance women’s participation. From my experience, men are often reluctant to open up to women in their ranks. They fear it will bring unwanted competition as they see programmes to tackle gender inequalities as biased as they focus only on women and give them an unfair advantage where skills and capacity is no longer guaranteed in the selection process.

Cristina Iampieri: Knowing about the origin of the resistance– the fear of unfair competition and accepting less competent candidates– I chose a path less explored: Leadership and gender. I spoke to G5 Sahel senior managers and explained that it is not only about gender equality but also about good leadership. Good leaders are inclusive and can utilize diversity for strategic and operational purposes.  I tried to activate their intrinsic motivation– they want to be good leaders. I explained that the competition should not be between men and women, but about who the best leader is. Good leadership, whether male or female, gains from diversity. For instance, a female leader who does not value diversity, will lose out on valued operational advantages same as a conservative male leader. I actually managed to change their perspective of how they look at men and women in the security forces and calmed their fear of opening the door to women.

Gender Bulletin: How has the gender component improved the impact and outreach of your work/the programme?

Cristina Iampieri: This is work in progress and its impact will only be visible after some time. However, it did not take long to see a change in the mindset of our counterparts: Right after the gender workshop, male participants showed a new openness to becoming “gender champions”. For example, the Chief of the Special Investigation Unit in Burkina Faso launched a special TV appeal for women to join the unit. Similarly, the Joint Force has appointed a female G9– an important strategic position in civil military corporation. Positive developments can already be seen, but we are still very far from reaching critical mass.
The most visible change so far is more openness and more understanding that gender equality is not only about protecting women and children as a vulnerable group, but that there is much more to it. It is about the active participation of women in security forces.

Gender Bulletin: What steps would you recommend to others to enhance female participation in the security sector?

Cristina Iampieri: Work with men. I believe, organizing activities with women for women in the security sector in the early stages is just a waste of time. As there are so few women in the security sector, you need to work with the men who are already there and face their fears. You also have to be prepared to tackle the sense of isolation many of the gender champions have as they are often going against social and cultural norms. You need to give them tools to protect themselves and provide them with the narrative to be able to convince others.

Gender Bulletin: Do you have any recommendations when working on coordination with other agencies on gender equality issues?

Cristina Iampieri: I partnered up with other UN agencies to have greater impact, organizations who are recognized in this field, to get a stronger leverage. These partnerships are essential, because it is about changing mindsets. You want to convey a strong message and to voice it better; you need allies. Talking to donors is also important, because they have another leverage– the political and economic one, that can help opening the door for discussion. But then you have still have to work on activating the intrinsic motivation, the real factor of change.

More information on the G5 Sahel program and the reflection workshop can be found here.