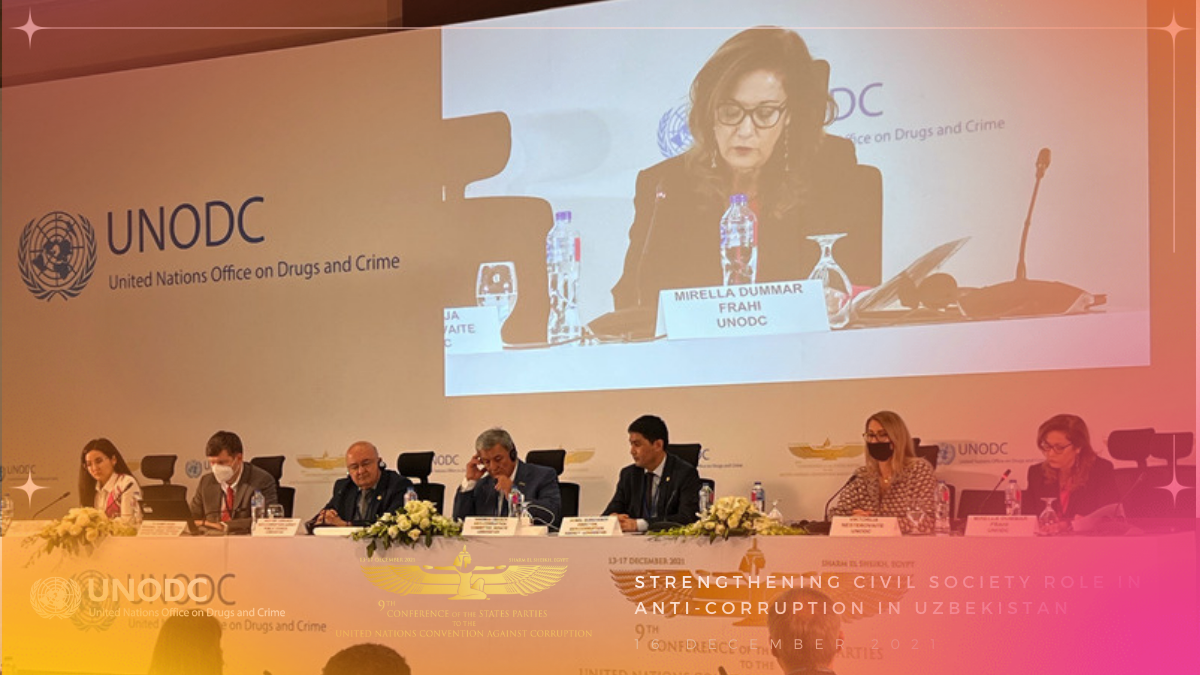 Sharm El Sheikh (Egypt) - 15 December 2021 – The special event ‘Strengthening civil society’s role in anti-corruption in Uzbekistan’ at the Ninth session of the Conference of the State Parties to the UNCAC (COSP9) demonstrated the results achieved through a combined effort between UNODC, the European Bank for Reconstruction and Development (EBRD) and the Anti-Corruption Agency of Uzbekistan, not least the civil society’s voices.

In support of Uzbekistan’s anti-corruption efforts, UNODC and EBRD joined forces in 2020 in a project that focuses on building the capacities of civil society organizations as well as the private sector, so they can participate effectively alongside their governmental counterparts in the implementation of anti-corruption efforts, notably the UN Convention against Corruption (UNCAC) – the only internationally binding legal instrument against corruption.

In Uzbekistan, within the framework of this project, UNODC delivered multi-stakeholder trainings on the Convention and its Implementation Review Mechanism, provided support for anti-corruption research, and supported the establishment of the Anti-Corruption Agency’s Public Council. The Council, currently composed of 31 members, serves as a platform for anti-corruption dialogue, including civil society and private sector stakeholders.

In recent years Uzbekistan undertook a number of key reforms in the area of anti-corruption and is now working to systematise those policies, making them strategic in nature, identifying priorities and defining the expected impact on the level of corruption in the country, as highlighted by Nariman Umarov, Chairperson of the Anti-Corruption Committee, Senate of Uzbekistan

Akmal Burkhanov, Director of Anti-Corruption Agency, Uzbekistan noted that the inclusiveness and transparency of public authorities and administration are key factors and the most important priorities in combating corruption. “As the experience shows, the factors to deter corruption are the transparency of government agencies and the accountability of officials to society.” - stressed Burkhanov.

Akhtam Tursunov, Chairman of the Anti-Corruption Agency’s Public Council, Uzbekistan emphasized as one of the main goals for Public Council is to act as a "bridge" link between the Agency and the citizens for the implementation of a joint dialogue, ensuring effective cooperation of the Agency with non-governmental organizations, the media and the public.

Shakhnoza Joldasova, Chairperson of the Youth Parliament under the Legislative Chamber of Uzbekistan, Member of the Anti-Corruption Agency’s Public Council noted that young people make up 60% of the population of Uzbekistan. Accordingly, the involvement of young people in the legislative process, in politics and in public administration is becoming a requirement of the times. In 2020, the Youth Parliament was created under the Legislative Chamber and it acts as a strategic partner of the Anti-Corruption Agency of the Republic of Uzbekistan, which is supportive of proactive young people who are not indifferent to the fate and future of the country.

The special event aligns with the recently launched new UNODC 2022-2025 Programme for Central Asia which reflects national priorities in respect with the Sustainable Development Goals. The Programme acts as a strategic framework for regional cooperation, focusing on technical and expert support. Effective implementation of the Programme will continue involving non-governmental actors at grassroots, local, national, and regional levels as well as with the private sector.