On 14 March 2022 in the margins of the 65th UN Commission on Narcotic Drugs (CND), the Judicial Cooperation Network for Central Asia and Southern Caucasus (CASC) jointly with the Prosecutor’s General Office of Uzbekistan conducted a meeting with representatives of the Prosecutor General’s Offices (PGO) of Armenia, Georgia, Kyrgyzstan and Uzbekistan, the European Judicial Network and the West African Network of Central Authorities and Prosecutors (WACAP). The meeting took stock of the CASC network’s achievements and operational results in preventing and combating illicit drug trafficking within Central Asia & Southern Caucasus and beyond this region. 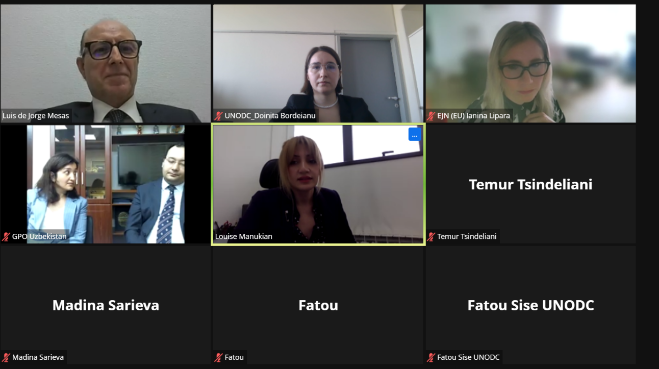 Relevant stakeholders present at the meeting introduced cases of successful cooperation in criminal matters mainly involving illicit drug trafficking and advanced several recommendations for fostering the partnership with the CASC Network.
The representative of the PGO of Uzbekistan, Mr. Nozim Khodjaev, Deputy Head of the International Legal Department of the Prosecutor General's Office, in his quality of co-organizer of the side-event commenced the meeting and delivered opening remarks. He highlighted that the CASC network is instrumental in strengthening judicial cooperation with other regions, particularly with Europe and countries from Middle East, including Saudi Arabia.

He further presented a mutual legal assistance case between Uzbekistan and Thailand and mentioned that the two countries have actively been collaborating on combating and prosecuting different types of organized crime.

The Prosecutor General’s Office of Armenia, represented by Ms. Louise Manukian, Deputy Head of the International Legal Cooperation Department in the Prosecutor General's Office, noted that the CASC network facilitated several cases involving money laundering over the last years and was a great support during the Covid-19 pandemic through the compilation and dissemination of the list of emergency measures taken by central authorities. In her final remarks, Ms. Manukian invited the stakeholders to continue working together on combating drug trafficking and noted that transnational organized crime can be addressed only by staying connected.

The usefulness of the list of emergency measures adopted by central authorities was also highlighted by Mr. Temur Tsindeliani, Prosecutor in the Prosecutor General’s Office of Georgia, who stressed that this measure was of paramount importance for strengthening judicial cooperation with other regions.

Kyrgyzstan’s position along the Northern Route of illicit drug trafficking sourcing from Afghanistan exposes the country to multiple organized crime threats. To address the lengthy communication between central authorities, which is executed via conventional communication channels, supporting different regional cooperation networks, as well as making use of the practical tools and instruments provided by the CASC network were suggested as effective means by Mr. Tilek Kudaiarov, Senior Prosecutor at the International Legal Cooperation Department of the PGO of Kyrgyzstan.

The Coordinator at the European Judicial Network (EJN) Secretariat, Ms. Ianina Lipara, introduced different tools for judicial cooperation that were developed by the EJN (e.g., Fiches Belges, Judicial Atlas, Compendium etc.) to support the drafting of MLA requests and their translation into the EU languages. Thereafter, she noted that the EJN platform doesn’t store any information about the cases as this information is saved on the computer of the person submitting the request. More information about the EJN network and its tools can be found on the website: ejn-crimjust.europa.eu.