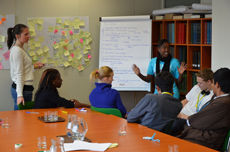 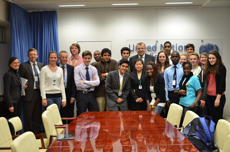 "Think ahead, act in longer terms, and let us not fail". These were a few of the messages presented by the Youth Initiative during the 55th Commission on Narcotic Drugs, held in Vienna, Austria, from 12 to 16 March.

Gathered since Monday 12, the 20 young persons from 7 different countries and from the Vienna International School had the opportunity to exchange opinions and experiences, and analyze together the situation of drug use, prevention, and treatment in their communities. Based on this they produced two statements and addressed representatives from the Civil Society, Governments, and the United Nations with their hopes, dreams, and personal commitment for action.

The high point of the Youth Initiative participation in the CND was on Wednesday morning, when they addressed the plenary of the Commission, during the official meeting on the ' Implementation of the Political Declaration and Plan of Action on International Cooperation towards integrated and Balanced Strategy to Counter the World Problem - demand reduction and related measures.

In their messages, these young persons called upon Governments to support and act on drug abuse prevention and treatment. They pledged the policymakers to think future generations and commit themselves to avail education to parents, teachers, and youth, and offering not just information and understanding but also skills, such as resilience skills, social skills, critical thinking, parenting skills, and utilizing interactive methods and various learning environments. Furthermore, they called upon governments to stop stigmatizing drug users and enhancing their efforts to reduce drug availability. They dreamed of societies offering schooling, healthcare, and social support to all youth and to all families, enabling the families to offer love and support within one another. The young persons committed themselves to use social media to mobilize youth around the globe, to raise awareness and to serve as role models, and support the CND in all the ways they can.

After the Plenary, Youth met with UNODC Executive Director

Thrilled with the opportunity to speak directly to the executive director for over 30 minutes, youngsters shared views, experiences, hopes, and commitments regarding the Youth Initiative and drug abuse prevention. Asked about what he believed he could learn from them, Mr. Yury Fedotov said: "We need fresh ideas, and you are the ones who have them."

The Youth Initiative was created at the request of the Executive Director of UNODC by the Prevention, Treatment, and Rehabilitation Section (PTRS) to engage and empower young people to reflect on the effects of substance use in their schools and communities and to start taking action against it. The Initiative is connecting youth globally through social media to discuss, inspire, and learn from each other on the ways of promoting healthy lifestyles and start creating activities mobilizing their peers, families, schools, and communities.