International Youth Day: It's your health, it's your future 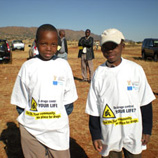 12 August 2009 - As the world marks International Youth Day today, UNODC calls on young people to take charge of their health and future.

Using drugs at an early age has been linked to negative health and social outcomes in later years. As a teenager has told UNODC: "Drugs are bad when you want to achieve your goals."

Drug use among the young is more than twice as high as drug use among the general population and three times as high in the case of cannabis. "Since the 1960s, we have seen that drug use has been first and foremost a youth phenomenon," says UNODC drug expert Thomas Pietschmann. Using illegal substances at a young age "is dangerous because it is a time when young people still have problems making the right decisions and when their brains are still developing," he says.

Drugs can cause anxiety, panic and paranoia. They can give the chills, make users sweat, give them a dry mouth and tremors, and much more. Users may also lose their appetite and interest in their physical appearance.

The UNODC public service announcement Faces illustrates the negative effects of drug use. The video spot follows four young people whose continued use of illicit drugs changes their appearance and undermines their health. It calls on young people to learn about the dangers of drugs and to make informed choices. Getting the facts and sharing them with their friends can make a difference. So can getting involved in pro-health efforts in their local communities and online networks.

As Secretary-General Ban Ki-moon says in his message on International Youth Day: "Young people often lead by example." When it comes to health and development, they can lead the way to a promising future. Youth have unique skills and perspectives, and they can put them to good use in protecting their health from drugs. In fact, a vast majority of young people are not doing drugs. They are pursuing their goals at school, at work and in their communities.

Celebrated every year on 12 August, International Youth Day is an opportunity to focus the world's attention on issues that are important to young people, such as education, employment, the environment, health and drug use. On this day, young people are given a voice in these and other matters, and are encouraged to continue to contribute to society.

For more information on trends in drug use among young people, please read the special feature on youth and drugs in the World Drug Report 2009 (pages 23-30).