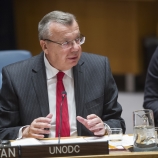 Quoting Afghan President Ashraf Ghani when he said recently that the country should "face the future with full unity and with confidence," Mr. Fedotov informed the UN Security Council that "We must support Afghanistan in this momentous task, and begin this decade of transformation with courage and determination."

He stressed that the lesson of the past ten years was that counter-narcotics should be fully integrated into development and security strategies, and delivered as part of unified assistance. The UNODC Chief said, "We must do more to ensure that action to weaken the stranglehold of drugs and crime goes hand in hand with efforts to strengthen the licit economy."

Last month, the UNODC Chief met with both President Ghani and Chief Executive Abdullah Abdullah and informed them that UNODC will cooperate closely with the Afghan government over the long term to counter the harmful effects of illicit drugs on Afghanistan and its people.

UNODC's Afghanistan Opium Survey 2014 reported, on 12 November, a seven per cent increase in opium poppy cultivation to 224,000 hectares. Potential opium production was estimated at 6,400 tons, an increase of 17 per cent over 2013. The country's southern region now accounts for 69 per cent of total national production. Alongside these developments, there a 63 per cent drop in eradication to 2,692 hectares.

Mr. Fedotov's briefing in the UN Security Council Chamber was given during a meeting that discussed the situation in Afghanistan and its implications for international peace and security.