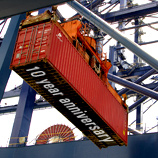 17 December 2014 - An estimated 500 million containers accounting for 90 per cent  of the world's cargo are shipped around the world every year virtually uninspected, allowing consignments of narcotics, weapons and other illegal goods to enter countries undetected.

The global Container Control Programme (CCP) was therefore established in 2004 by the United Nations Office on Drugs and Crime (UNODC) and the World Customs Organization (WCO) to thwart these criminal activities by pooling the strengths of customs and other law enforcement bodies.

The CCP has notched up some stunning successes in its 10 years of existence. In 2013 alone, it boasted seizures of 23 metric tons (mt) of cocaine, around 6mt of cannabis, 1.2 mt of heroin, 60mt of the chronic pain medication tramadol and 725kg of ivory.  Counterfeit goods were intercepted in 119 containers, which would stack up 309 metres high, 8 metres taller than the Eiffel Tower.

Around the world seaports can process up to 50,000 containers daily. Against this background, CCP teams are trained to identify high-risk containers using a combination of high-tech profiling techniques, human intelligence and traditional hands-on methods. More than 550 officials were trained in 2013, 12 per cent of whom were women.

"Today's globalized trade environment poses a number of common challenges to States in containing the illicit flow of goods," said Kunio Mikuriya, Secretary General of WCO. "The Programme offers an effective solution to countries in coordinating and managing law enforcement responses at seaports and dry ports across the globe".

Operating in 20 countries today - the latest being Moldova which joined yesterday -, the CCP helps Governments to improve their law enforcement capacity, thereby preventing drug trafficking and other illegal activity, while also facilitating legitimate trade.  Poised to expand into the inspection of air cargo, the Programme has set up a pilot project at Pakistan's Karachi airport as a first step.

Under the Programme, joint operations are conducted by law enforcement authorities at ports of origin, transit, and destination. Secure information exchange systems, such as ContainerCOMM developed by the WCO to facilitate the transmission of sensitive intelligence, have played a key role in supporting CCP port control units worldwide.

Since its inception, the CCP has established more than 30 operational port control units, leading to significantly increased detections and confiscation of drugs and other illicit goods, including more than 100 mt of cocaine, 3 mt of heroin, 60 mt of cannabis, and 1,273 mt of precursor chemicals used to manufacture illicit drugs, as well as cigarettes, luxury cars, medicines, electronic waste, hazardous materials and wildlife.