11 November 2014 - UNODC, together with the Somaliland Ministry of Justice, recently unveiled an advocacy campaign to address the challenges faced by the local justice system. Through simple and easy to remember images drawn by local artists, the campaign engages the general population and informs them of their individual rights, such as the right to judicial protection for victims, witnesses and presumed criminals.

A high majority of criminal cases in Somaliland are settled by customary or Sharia'h dispute resolution mechanisms. However, formal justice mechanisms may be better placed to implement the law of the land, protect victims' rights, and apply international norms and standards. The "know your rights" campaign - formally known as the Litigants' Charter Advocacy Campaign - will build awareness, trust and understanding about Somaliland's formal justice system, particularly on the roles of police, prosecutors, legal aid practitioners, and judges.

The awareness campaign aims to reach 100,000 men, women and children through 24 trained community advocates. These specialists will lead the judicial rights conversation in 1,000 schools, market places and displaced persons camps across all regions of Somaliland.

"This campaign will draw Somalilanders to the formal justice system like few actions have done before," stated the Somaliland Minister of Justice, Hussein Aideed. "Not only will it increase peoples' awareness of what the police, prosecutors, legal aid lawyers and judges can do for them, but it will also spread important messages about juvenile justice and sexual and gender-based violence to the outlying towns and villages of Somaliland."

Jose Vila del Castillo, UNODC Regional Representative for Eastern Africa stated that this campaign is proof of UNODC's strong commitment to criminal justice reform in Somaliland. "Through this campaign we enthusiastically encourage Somalilanders to find out about the formal justice system, to trust it, and above all, to use it".

Key campaign messages were developed by local artists into 50 powerful and culturally appropriate cartoons. Those images, in turn, have been printed on thousands of posters to be displayed on police stations, court houses and community centres - and on T-shirts, children's school notebooks, and shopping bags used in markets throughout the regions.

One of the cartoons, pointing out the exclusion of women in the traditional justice system (the Xeer) as a disadvantage, shows a group of elders deliberating over a case of criminal conduct. The caption translates as 'Women do not traditionally participate in the decision-making of the Xeer'. Other cartoons encourage Somalilanders to trust, and not to fear, the police; explain how to report a case of criminal misconduct; describe the role of the police, prosecutor and judge in a criminal case; and explain how juvenile cases are handled differently from adult cases. 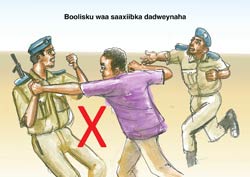 The 10-week long campaign started on November 2014, and is one of the activities of the UNODC Criminal Justice Programme in Somaliland aiming to promote the Rule of Law and Human Security in the region in order to address the challenges facing its criminal justice institutions. The Campaign is being delivered in partnership with the Somaliland Lawyers' Association, the Somaliland Women's Lawyers' Association, the University of Hargeisa Legal Aid Clinic and the Amoud University Legal Aid Clinic.