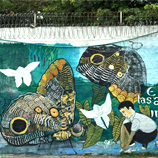 5 November 2015 - Restorative justice for children seeks to repair the damage caused by child offenders through alternative mechanisms of conflict resolution such as mediation and community service involving the offender, the victim and the community. It recognizes the central role of the victim while at the same time promotes the reintegration and rehabilitation of the child offender.

In this context, UNODC - together with the Colombian Family Welfare Institute - implements restorative justice practices and peacebuilding activities for children in detention in the South American country. Drawing on the " United Nations Model Strategies and Practical Measures on the Elimination of Violence against Children in the Field of Crime Prevention and Criminal Justice" together with international standards and norms recently adopted by the United Nations General Assembly, the activities fall under the umbrella of the UNODC/UNICEF Global Programme on Violence against Children regarding crime prevention and criminal justice.

In four regions of Colombia - Bolívar (Cartagena), Antioquia (Medellín), Valle (Cali) and Santander (Bucaramanga) - UNODC juvenile justice experts are currently applying restorative justice practices intended to impact the judicial proceedings of those in pre-trial detention, and to achieve early release for those who are serving a custodial sentence.

The work of UNODC in those four regions focuses on fostering peace between groups of children in detention facilities, some of which show problems of cohabitation stemming from regionalism, neighbourhood violence and rivalry. Aiming to achieve a non-violent atmosphere for all children in those facilities, UNODC is currently carrying-out peacebuilding workshops and related activities, including awareness raising, forging peace agreements and engaging in cross-intercultural activities.

With the UNODC/UNICEF Global Programme, UNODC aims not only to build and strengthen the capacity of personnel dealing with children in detention, including psychologists and social workers in Cartagena, Medellín, Cali and Bucaramanga, but ultimately to contribute to the local peacebuilding process by promoting good practices in the area of juvenile justice.

UNODC's work on justice for children

Standards and norms on Crime Prevention and Criminal Justice