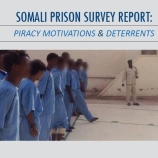 3 September 2015 - A recently released survey of prison inmates convicted of maritime piracy has named poverty as one of the driving reasons for their criminal actions. Conducted by UNODC in collaboration with the NGO Oceans Beyond Piracy (OBP), the informal survey questioned 66 maritime pirates at prisons in Somaliland, Puntland, and the Seychelles. The survey included sections on the pirates' motivation, the perception of threats, piracy deterrence and life after prison.

Some of the survey's key findings include:

As a sample of answers provided by inmates accused of piracy, one prisoner who was asked about his motivation to go to sea responded, "I was out of money so I decided to join the pirates in order to get food." Another prisoner meanwhile admitted "my family is poor, so that's why I joined the pirates." Other reasons cited included anger at illegal fishing in Somali waters: "Illegal fishers caused us to become pirates," one prisoner remarked.

Concerning the fear felt when operating on the high seas, several inmates said a primary concern was the threat of international navies. Prisoners also mentioned a fear of imprisonment, as well as the possibility of being shot at by armed guards. Asked about possible on-shore threats, some of the prisoners indicated they were concerned about armed local groups.

Speaking on the findings, Alan Cole, head of UNODC's Global Maritime Crime Programme, noted: "Since the peak of maritime piracy in 2008, there has been a sharp decline. Although not conclusive proof, this survey shows that international navies, armed guards, and the prosecution of pirates have all played a decisive role, and will continue to keep the pirates on the back foot."