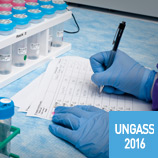 19 April 2016 - Coinciding with the UN General Assembly Special Session on the world drug problem (UNGASS 2016) taking place this week in New York, UNODC, together with the Government of Germany, organized a side event on the role played by quality scientific research in addressing the use, supply and trafficking of drugs.

The event promoted transparent and unbiased research as the essential tool to guide drug policy at the national and international levels. It showcased research findings which touched upon important questions under discussion at the UNGASS. It also emphasized the unknowns in the dynamics of the drug problem and its future development.

At the event's opening, Angela Me, UNODC's Chief of Research, underlined the role of UNODC in providing authoritative data and analysis to understand both the trends and the dynamics of drug use and its consequences, together with issues of drug supply and trafficking.

Daniel Brombacher, from the German office for the financing of development, GIZ, emphasized the need to enhance knowledge of all components of Alternative Development, such as its funding requirements, the number of people who currently grow illicit crops, and the number of people who have benefitted from this strategy. Other applications of quality research mentioned by Mr. Brombacher were in an improved awareness of the link between drug and development and on innovative to development-related drug policies.

Other participating experts discussed this broad issue as well. Jonathan Caulkins, a Professor at Carnegie Mellon University, argued about the need to move beyond prevalence data when trying to understand drug use and drug markets. While analysing the cannabis market in the US, he showed how a small minority of users dominate its consumption, the use-related harms and the spending that fuels the black market for this drug. Answering the question on how much the use of marijuana has increased since its nadir around 1992 in his country, Professor Caulkins replied that this depended on what indicator is used, as prevalence displays a slight change while the number of regular users shows a sharp increase.

One of the tasks that Member States has assigned to UNODC is to identify, analyse and monitor global drugs and transnational organized crime threats, knowing that this information enables the international community to define appropriate drug and crime control priorities.