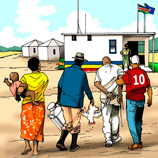 23 August 2016 - A nationwide campaign to reform Kenya's policing services at the station level was launched today in Nyeri county. UNODC, in conjunction with the National Police Service, will for the first time train and advise police commanders at the county, district and station levels on their key reforming duties. The objective is to establish the Inspector General's vision of 'people-centred policing' at the point of service delivery: the police station.

In this context, UNODC has supported the development of a 'Roadmap Toolkit' to guide the training of officers, which has been launched today by Kenya's Inspector General, Joseph Boinnet. The Toolkit comprises the key reforming duties for police managers in the field extracted from the 30-plus reforming policies, strategies and frameworks developed for the police in recent years. They include the new Service Standing Orders, regulations on the use of force and the use of firearms, and strategies to counter police corruption, to improve internal and external communication, and enhance police compliance with human rights.

Speaking at the launch, Mr. Boinnet said, "This initiative is vital to the transformation process for Kenya's policing services. Today we are in Nyeri in order to ensure that police reforms move to the field stations and closer to the people we serve".

Moving forward, UNODC will support the police to pilot the campaign in seven counties - Nyeri, Laikipia, Nyandarua, Homa Bay, Kisii, Nyamira and Migori - with more to follow. A group of passionate 'reform champions' from within the police volunteered to be the messengers of change. They will work with the police managers at the county, district and station levels to embed reforms in everyday police operations, and will ensure that progress against key milestones are channeled back to the Inspector General's office. A series of illustrations - for example on anti-corruption - will assist their work, and will help build awareness of the police reform agenda at the community level.