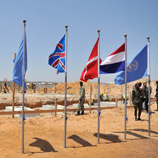 19 February 2016 -The foundation stone for the future Mogadishu Prison and Court Complex (MPCC) was laid at a ceremony in the Somali capital yesterday that spotlighted the construction of a state-of-the-art facility designed specifically to handle terrorism and other high-security cases.

The ceremony was attended by Somalia's Prime Minister, Omar Abdirashid Ali Sharmarke, the Dutch Ambassador to Somalia, Frans Makken, senior United Nations officials and other Somali Government representatives, including the National Security Advisor, the Commissioner of the Custodial Corps, and the Mayor of Mogadishu. The MPCC project is a key component of UNODC's Global Maritime Crime Programme, which was originally launched in 2009 to provide support for the trials of piracy suspects in East Africa.

"Through this important project, we are helping the people of Somalia rebuild much needed institutions that respect and promote the rule of law and tackle damaging terrorism and organized crime," said Yury Fedotov, UNODC Executive Director. "Lawyers and judges will be able to hear trials in a safe and secure environment, and those awaiting trial for the most serious crimes will have a protective and humane environment that upholds their fundamental human rights."

The first phase of construction is already underway and is expected to finish at some point next year. Plans for the initial phase call for the building of two courthouses, accommodation for judges and a high-security cell block that can house up to 200 inmates.

Trials of high-risk suspects are projected to begin by the middle of 2017. The provision of accommodation for suspects and inmates near secure courthouse facilities will reduce the need to transport prisoners through Mogadishu, which exposes them - and corrections officers - to risks of violent attack.

The United Nations Office for Project Services produced designs for the facility and is overseeing construction of the MPCC, which is expected to be completed by early-2018. In its finished state, the prison will be equipped with 1,000 beds and meet international human rights standards. Three medium-security cell blocks will be erected during the third and fourth phases of construction.

Mr. Fedotov thanked the Governments of Denmark, the Netherlands and the United Kingdom for funding construction of the MPCC, along with the United Nations Multi-Partner Trust Fund.

The project is being undertaken within the structure of the Somali Joint Rule of Law Programme under the Somali New Deal Compact's peace- and state-building goal 3 that focuses on justice issues. As part of its ongoing activities in the region, UNODC's Maritime Crime Programme continues its training and mentoring roles at its supported prisons in Hargeisa (Somaliland) and Garowe (Puntland) through the provision of four prison experts to assist Custodial Corps management in the day to day operations of prisons, as well as mentoring to Commissioners and Minsters on defining and implementing strategic correctional objectives.