During UNGA Summit on Refugees and Migrants, UNODC affirms need to face down migrant smugglers 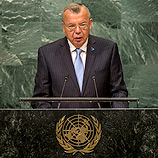 22 September 2016 - "We cannot allow the biggest refugee crisis since the Second World War to be exploited as a business opportunity," said UNODC Chief Yury Fedotov in his remarks at the opening of the United Nations High-level meeting for Refugees and Migrants at the 71st UN General Assembly.

Mr. Fedotov was speaking in the first of two contributions to world leaders and heads of state gathered at the summit. Together, these remarks provided a cogent contribution to international efforts against criminals who exploit the hopes and needs of women, children and men driven to leave their countries.

With millions of refugees and migrants at risk, there was a pressing need to vigorously combat human trafficking and migrant smuggling; but, he said, "It is, most of all, a question of respect." Mr. Fedotov called for greater recognition that everyone on the move is "deserving of, and entitled to, protection."

Faced with the global movement of people, the UNODC Executive Director encouraged countries to investigate and prosecute such criminal practices and to protect the rights of victims, including those with an irregular status. He stressed the importance of implementing the protocols on human trafficking and migrant smuggling under the UN Convention on Transnational Organized Crime.

Later that day, the Executive Director delivered an intervention at a roundtable addressing the vulnerabilities of migrants and refugees. He focused on three critical areas.

First, the need to shift the focus away from punitive measures affecting migrants and towards the allocation of sufficient resources to combat the organized crime that feeds off migrants and refugees. Second, an enhanced strategic response targeting the criminal networks. Finally, protection for victims and irregular migrants.

To achieve these goals, Mr. Fedotov said, "We have to be more focused, sustained and better resourced." He said time-limited interventions that "fail to go after the real criminals, risk punishing victims of crime, while leaving transnational networks in place to threaten more lives and cause more harm."

At the Summit's opening, countries agreed on a landmark declaration that will hopefully lead to the adoption of a global compact on safe, orderly and regular migration in 2018. Of the nineteen commitments by countries under the New York Declaration that apply to both refugees and migrants, three are dedicated to action concerning trafficking in persons and migrant smuggling. On the issue of disrupting and eliminating criminal networks, the declaration asks countries to review their "legislation to ensure conformity with our obligations under international law on migrant smuggling, human trafficking and maritime safety."

Prior to the Summit, on 16 September, Nobel Peace Prize nominee, Nadia Murad Basee Taha, who survived serious abuse and exploitation at the hands of ISIL, was appointed UNODC Goodwill Ambassador for the Dignity of Survivors of Human Trafficking.

The appointment reinforces UNODC's unique position and responsibility as the lead body within the UN dedicated to fighting all forms of human trafficking, including sexual slavery, forced labor, child soldiering and trafficking for the purpose of organ removal.

UNODC's work on Smuggling of Migrants