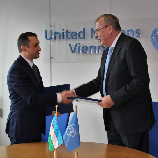 The agreement is a direct outcome of the 1 November meeting between UNODC Executive Director Yury Fedotov and the President of Uzbekistan, H.E. Mr. Shavkat Mirziyoyev. The meeting provided an opportunity to discuss matters pertaining to Uzbekistan's Action Strategy for 2017-2021, the country's reform agenda, drug control, transnational organized crime, security, drug use prevention and regional cooperation.

Following the meeting and in consultation with UNODC's Regional Office for Central Asia (ROCA), the Government of Uzbekistan has developed a plan of practical measures (Road map) based on the national priorities outlined in the Action Strategy. The Government also identified areas where UNODC could provide technical assistance, including in strengthening ongoing reforms of law enforcement, criminal justice, anti-corruption and the healthcare system.

Speaking at the signing ceremony, UNODC Executive Director Yury Fedotov welcomed the strengthening of partnership with Uzbekistan and stressed that the Road Map is a live document that would evolve to address emerging threats and challenges.

During the initial meeting, President Mirziyoyev stressed that Uzbekistan attached great importance to deepening cooperation with UNODC in combating illicit drug trafficking, transnational organized crime and international terrorism. He cited that a number of programmes and initiatives have been implemented with the technical assistance of ROCA.

A review mechanism of the joint Road map implementation will be established and aligned with the UN Development Assistance Framework (UNDAF) and the 2030 Development Agenda for Sustainable Development. The Road map will be implemented under the framework of the UNODC Programme for Central Asia (2015-2019) as well as the Regional Programme for Afghanistan and Neighbouring Countries and Global Programmes.

UNODC Executive Director meets with the President of Uzbekistan to discuss cooperation against illicit drugs, transnational organized crime and terrorism