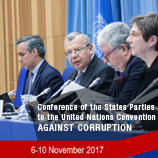 6 November 2017 - Although corruption can strike anywhere, I have seen how it hits the poor, the weak, and the most vulnerable, UN Secretary-General António Guterres said in a message today read by UNODC's Executive Director at the opening of CoSP7.

"It can deny people access to health services, schools and economic opportunities. It can deny them hope of a better future," the UN Secretary-General said.

Mr. Fedotov, in his own opening address, said the biennial conference was dedicated to "combatting the crime of corruption, and strengthening the fight against the many other crimes enabled by corruption and to protect lives and livelihoods."

He said UNODC's role was to stand guard over the Convention and to support countries against this pernicious crime, including on the ground through its global field network. Mr. Fedotov said the Office was working closely with countries to strengthen the implementation of the UN Convention against Corruption, including through a ground-breaking peer-review mechanism.

"As part of the Global Programme for the Implementation of the Doha Declaration, UNODC has initiated a Global Judicial Integrity Network to help strengthen integrity and prevent corruption in the justice system," he added.

Other speakers at the opening included Russian Minister of Justice and outgoing president of CoSP6, Alexander Konovalov, and the Attorney General of Guatemala and President of CoSP7 Thelma Esperanza Aldana-Hernández de López.

Over 1,600 participants from Member States, parliaments, inter-governmental organizations, civil society, and the private sector are attending COSP7. Around 45 side events and exhibitions will be held on the margins of the conference to promote discussion on anti-corruption activities.

Message of United Nations Secretary-General, António Guterres, to the Conference of State Parties to the United Nations Convention against Corruption