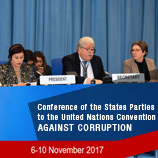 10 November 2017 - "We all have a duty to speak out against corruption wherever it occurs, so that the future is free of this poisonous crime," UNODC's Executive Director Yury Fedotov said today. He added: "We cannot do this alone. Ending corruption will take everyone's commitment and determination."

Mr. Fedotov said that, with each passing COSP session, the world moved closer to achieving: the universal adoption of UNCAC as the world's most powerful anti-corruption tool; a unique and highly successful implementation review mechanism that binds all countries together in spirited partnership; and a powerful global alliance aimed at ending corruption.

He said this was the first COSP session, since the adoption of the 2030 Agenda for Sustainable Development, including Goal 16 on peaceful and inclusive societies, that targeted substantial reductions in corruption.

Mr. Fedotov told participants: "Because of corruption's disturbing relations with other crimes, such as human trafficking, migrant smuggling, and wildlife crime, there is now a highly visible connection between our efforts under the Convention, and the UN's much wider work on the 2030 Agenda."

The UNODC Chief was speaking at the closing of COSP7. During the five days of the conference, resolutions were adopted on subjects ranging from sports integrity to Small Island Developing States, among others. Around 55 side events and exhibitions were held on the margins of the conference.

Mr. Fedotov paid warm tribute to the President of COSP7, Thelma Aldana, Attorney General of Guatemala to the other members of the COSP bureau, and to the many officials and staff at UNODC and the United Nations Office in Vienna who contributed to making the conference a success.

Statement of UNODC Executive Director Yury Fedotov: Closing of the Seventh Session of the Conference of the States Parties to the UN Convention against Corruption