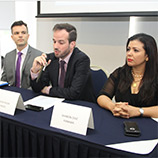 19 September 2017 - The number of women prisoners is increasing worldwide much faster than men, often linked to the imprisonment for minor drug offences. Countries are struggling to address the specific needs of women in prison systems traditionally designed for men.

As part of UNODC´s support to countries in addressing such prison challenges, a sub-regional meeting was held recently in Panama City to share good practices and review progress in the implementation of the United Nations Rules for the Treatment of Women Prisoners and Non-Custodial Measures for Women Offenders (the Bangkok Rules). The meeting brought together prison officials from Costa Rica, El Salvador and Panama, as well as representatives of civil society organizations promoting the rights of women prisoners and children with family members deprived of their liberty (Colectivo Artesana, NNAPES).

Speaking at the event, Maria-Noel Rodriguez, Team Leader for Prison Reform at the UNODC Regional Office for Central America and the Caribbean said: "The Bangkok Rules are a key instrument for countries seeking to meet their international human rights obligations and commitments under the 2030 Agenda and its Sustainable Development Goals 5 on gender equality and 16 on peace, justice and strong institutions."

During the meeting, a number of priorities for action were identified, including to study the situation of women in conflict with the law who are at particular risk (such as LGBTI, older women, foreign or indigenous women), to apply alternatives to imprisonment that take into account the backgrounds and specific needs of women, and to implement integrated models of care for children with family members deprived of their liberty.

Participants also discussed the needs of women imprisoned for drug offences and the importance of proportionality and gender-sensitive approaches to legal reform. In this regard, Sharon Díaz, Sub-Director-General for the National Prison Administration of Panama said: "The Government of Panama requested that UNODC produce a national study of the situation of persons deprived of their liberty, which has revealed the gendered impact of drug law enforcement."

"Although men commit 85 per cent of drug-related offences, over twice as many women than men are imprisoned for such offences, mostly as a result of poverty, addiction, affection or coercion. We will use the findings and recommendations of this study as a basis for future reforms," Ms. Díaz added.

UNODC supports countries in Latin America and other regions in promoting gender-sensitive alternatives to imprisonment and the treatment of women offenders and prisoners, in line with international standards and norms. Through integrated programmes at the country, regional and global levels, the Office provides legal and policy advice, as well as training and capacity building, in coordination with civil society and other partners.