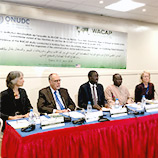 5 April 2018 - In light of the current security threats in West Africa, States see the urgency in strengthening the capacity of criminal justice systems. This is to address organized crime and violent extremism and to deliver fair and transparent justice, in accordance with the rule of law.

In this regard, UNODC and the West African Network of Central Authorities and Prosecutors against Organized Crime (WACAP), with the support of the United States, organized a meeting on how criminal justice systems and civil society can better prevent and address violent extremism in Burkina Faso, Mali, Mauritania, Niger and Senegal.

The meeting, convened in Dakar, Senegal, was officially opened by the Minister for Justice of Senegal, Ismaila Madior Fall. In his opening remarks, he stressed that "the justice system has an important responsibility to tackle the challenges of violent extremism and radicalization, involving civil society in the process of finding sustainable solutions."

Pierre Lapaque, UNODC Regional Representative for West and Central Africa, referred to the Secretary-General's Plan of Action to Prevent Violent Extremism, which calls for systematic and holistic prevention measures. Mr. Lapaque emphasized that "the work of civil society is crucial in addressing the problem of violent extremism. They provide a good understanding of the local realities, which is needed to devise effective policies in the region."

Gail Fisk Malone, Legal Adviser to the United States Ambassador in Senegal, stressed that "in order to address the problem of violent extremism, we need to understand its causes and find real solutions that involve the most vulnerable groups."

Over the past five months, UNODC, WACAP and a consultant distributed 500 questionnaires in Burkina Faso, Mali, Mauritania, Niger and Senegal, and conducted interviews with judges, magistrates, lawyers, prison personnel and civil society actors. During the two-day meeting, participants discussed the findings of this study and agreed upon regional and national recommendations.

These recommendations for governments, the criminal justice systems and civil society were included in the 'Dakar Call to Action', the main outcome of the meeting. They address, among other topics, witness and victim protection, access to legal aid, detention systems, reintegration, cross-sector cooperation and international cooperation. The recommendations also include the use of WACAP as a regional platform to foster dialogue between actors of the criminal justice system and civil society. The Dakar Call to Action will serve as a basis for UNODC's follow-up initiatives as well as for participants to advocate in their home country for tailored actions on preventing and countering violent extremism.

The event brought together 47 representatives from different sectors of the justice system, WACAP focal points as well as civil society actors. Nigeria and Chad attended the event as observers.

WACAP is a network of focal points from the 15 ECOWAS countries and Mauritania launched in 2013 with the financial support of France and the United States in cooperation with the ECOWAS Commission and the ECOWAS Court of Justice. WACAP, set up under the auspices of UNODC, brings together judicial actors from the region dealing with organized and serious crimes. It contributes to effective cooperation in criminal matters in West Africa and helps to support the investigation and prosecution of organized and serious crimes. See more at www.wacapnet.com