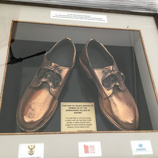 27 July 2018 - The Government of South Africa officially launched the United Nations Standard Minimum Rules for the Treatment of Prisoners, named after Nelson Mandela, the late President of the country.

In recognition of the United Nations' role in facilitating relevant negotiation process among Member States, the Government of South Africa presented to the Organization, through UNODC, a memorable gift: the replica of Nelson Mandela's shoes that he wore on the day of his release from prison.

By launching the Nelson Mandela Rules, the Government reiterated its commitment to advance prison reform in line with human rights standards. Speaking at the launch event, Michael Masutha, Minister for Justice and Correctional Services of South Africa highlighted that the Rules provide important guidance on the internationally recognized standards for the treatment of prisoners.

"Although these rules are not legally binding, the Government of South Africa is ready to incorporate them in relevant national policies and legal documents," Mr. Masutha continued, emphasizing that the national prison reform process has already begun. He also commended UNODC for the strong partnership with his country's Government.

Conveying a message of the UNODC Executive Director, the Office's Regional Representative Zhuldyz Akisheva expressed confidence that South Africa, with its experience, knowledge and human rights principles enshrined in its Constitution, would play an important role in supporting the implementation of the Nelson Mandela Rules at the regional and international levels. Citing ongoing initiatives, she acknowledged the important role that the Group of Friends of the Nelson Mandela Rules plays at the Vienna-based consultative process.

Summary: The revision process of the Standard Minimum Rules for the Treatment of Prisoners