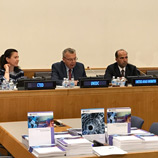 27 June 2018 - During the first-ever United Nations Counter-Terrorism Week, the General Assembly adopted by consensus a resolution stressing the need for countries to join forces as no one could tackle the scourge of terrorism alone.

Introducing the resolution, Assembly President Miroslav Lajčák (Slovakia) said: "the level of activity and participation we saw over the last few weeks, shows that the Global Counter-Terrorism Strategy is as crucial as ever", calling upon Member States to "make sure it is implemented on the ground".

By the terms of the adopted text, the Assembly stressed the importance of a sustained and comprehensive approach to address conditions conducive to the spread of terrorism. The resolution noted with appreciation UNODC's work to support Member States' efforts to prevent and counter terrorism. The Assembly also called on the Office to further enhance its technical assistance for capacity building, upon request.

On the side lines of the Counter-Terrorism Week running from 25 to 29 June, the Sixth Biennial Review of the Global Counter-Terrorism Strategy was held by the General Assembly. Adopted in 2006, the Strategy remains to be a unique global instrument to enhance national, regional and international efforts to counter terrorism.

In this regard, UNODC organized three side events, respectively, on countering the financing of terrorism, international cooperation to combat the use of the internet for terrorist purposes, and lawful access to digital data across borders.

Speaking at the events, UNODC Executive Director Yury Fedotov said: "The availability of cybercrime tools and services offer a dangerous avenue for terrorists to threaten essential services and critical infrastructure," while adding that technology is also an essential part of any solution.

The side event on countering the financing of terrorism, moderated by John Brandolino, Director of UNODC's Division for Treaty Affairs, focused challenges in the identification, investigation, disruption and monitoring of financial flows. On the same occasion, UNODC officially launched a Guidance Manual on Terrorist Financing Risk Assessment, which offers insights into different approaches and stages of risk assessment, and provides concrete examples.

Mr. Brandolino presented the joint project of UNODC, the Counter-Terrorism Committee Executive Directorate (CTED) and the International Association of Prosecutors (IAP) at the side event on lawful access to digital data across borders. He provided an overview of unique challenges for international cooperation posed by obtaining digital evidence while commending cooperation with partners on this important work.

Also attending, Mauro Miedico, Acting Chief of the UNODC Terrorism Prevention Branch presented the Directory of Competent National Authorities for terrorism-related cases. The repository was created in line with the Security Council resolution 2322 (2016), which called upon States to provide UNODC with information for its database.

Launched in 2003, UNODC's Terrorism Prevention Branch supports Member States in their ratification, legislative incorporation and implementation of instruments pertaining to preventing and countering terrorism. Since the Global Counter-Terrorism Strategy's last review in 2016, the Branch has enhanced the capacity of over 8,000 national criminal officials through 400 workshops, contributed to 40 additional ratifications of the international conventions and protocols related to terrorism, and assisted Member States with the revision and drafting of over 35 pieces of legislation.