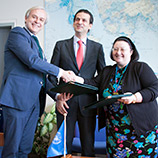 5 June 2018 - Italy and the United Nations Office on Drugs and Crime (UNODC) today signed a new €500,000 funding agreement aimed at supporting efforts to improve prison conditions in Lebanon. The agreement, which covers the period 2018/2019, marks the continuation of a long-term partnership between the three, totalling more than €1.5 million in assistance since 2015. Ultimately, it aims to enhance prison conditions and the delivery of prison-based rehabilitation programmes, including vocational training and income generating activities.

Signed by Jean-Luc Lemahieu, UNODC's Director for Policy Analysis and Public Affairs, and Maria Assunta Accili Sabbatini, Permanent Representative of Italy to the United Nations in Vienna, the latest agreement builds on the achievements of the previous prison reform work undertaken in Lebanon. Aimed at furthering this, the current phase of the partnership focusses on creating a foundation for a long-term prison rehabilitation strategy and strengthening the capacity of the Ministry of Justice, in close collaboration with the Ministry of Interior.

Speaking at the signing ceremony, Mr. Lemahieu highlighted that "an effective and humane prison system is a prerequisite for ensuring a fair justice system." He also pointed to the efforts of the Government of Lebanon amid ongoing challenges, and welcomed Italy's continued commitment and partnership to support the country in this regard.

"The agreement confirms Italy's strong commitment to advancing cooperation with Lebanon, one of our closest partners in the Mediterranean," Ambassador Accili Sabbatini said, adding: "We are happy to do this with UNODC, whose expertise and professionalism have already proven valuable in previous phases of the project."

UNODC has been working closely with the Ministry for Justice and the Ministry for Interior of Lebanon since 1999, supporting the country's efforts to strengthen the criminal justice system. Priority areas include prison reform and juvenile justice.