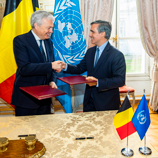 Brussels, 13 February 2019 - Belgium and the United Nations Office on Drugs and Crime (UNODC) have signed a new funding agreement worth two million euros to combat corruption and wildlife crime in Africa. The funds will boost UNODC's efforts in this area and allow for increased support to African Member States.

Criminals are known to net vast sums of money from wildlife and forest crime. These large amounts of criminally acquired funds are in turn used to support corruption, which consequently erodes the integrity of the government and facilitates distortions of economic activities that are not sustainable.

To prevent and fight wildlife and forest crime, sophisticated criminal networks need to be dismantled. Every link in the criminal chain has to be tackled, from the sourcing, transport and delivery of illegally harvested wildlife and forest products to the laundering of proceeds from these crimes.

John Brandolino, UNODC Director of the Division for Treaty Affairs, highlighted that "the crimes of wildlife trafficking and corruption are bad enough but together they are devastating, adversely effecting societies and development on a number of fronts".

Deputy Prime Minister, Minister of Foreign Affairs and European Affairs and Minister of Defense Didier Reynders said that "Belgium is very proud to contribute two million euros to support UNODC's Programme in the Central African region, with a focus on the Democratic Republic of the Congo (Virunga Park), Uganda, Chad and Cameroon."

Mr. Reynders emphasized that "this pledge is fully in line with our strong commitment to combatting illegal wildlife trafficking, which requires a global approach and international cooperation between source countries and importing countries." He also highlighted that "wildlife is an irreplaceable part of our planet's living natural resources. It must be protected for this generation and for those of tomorrow."

Combatting wildlife and forest crimes and the corruption which facilitates them, the Deputy Prime Minister said, "also benefits the development of local communities. By cutting  an important source of funding for criminal networks and armed groups, it is also crucial for regional governance and security."

Within UNODC, the Global Programmes for Combating Wildlife and Forest Crime; and on Corruption have built a strong joint programme to address all the links in the criminal justice chain- from crime scene to courtroom- with a special emphasis on combating corruption and dismantling criminal networks.

UNODC's joint programme of technical assistance has been focusing on future proofing of wildlife management authorities in source countries against corruption, and on building capacity to conduct financial investigations linked to wildlife crimes.

The new Belgian contribution of two million euros will complement activities that are currently underway and will allow UNODC to expand the geographic scope of its work. UNODC will work with wildlife management authorities to identify corruption risks, develop mitigation strategies and establish Corruption Prevention Committees with mentorship support. In addition, the Belgian contribution will support efforts to build global knowledge and visibility on the subject as well as to support parallel financial investigations linked to wildlife and forest crime.