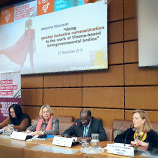 Vienna (Austria), 27 November 2019 - The Commission on Crime Prevention and Criminal Justice (CCPCJ) and the Commission on Narcotic Drugs (CND) held a joint interactive discussion on "Using gender inclusive communication in the work of Vienna-based intergovernmental bodies" on 25 November 2019 in Vienna, Austria.

The meeting was organized in the framework of the "Let's Talk Gender" initiative of the Secretariat to the Governing Bodies of the United Nations Office on Drugs and Crime (UNODC), which aims at facilitating a discussion on mainstreaming a gender perspective in the work of Vienna-based intergovernmental bodies.

"Language plays a critical role in how we interpret many processes and issues, including in the deliberations of the two Commissions. It is therefore very useful to learn about the tools on promoting and using gender inclusive language", highlighted Ambassador Alena Kupchyna, Chair of the Commission on Crime Prevention and Criminal Justice, in her welcoming remarks.

Noting that the discussion coincided with the commemoration of the International Day to Eliminate Violence against Women, Ambassador Mirghani Abbaker Altayeb Bakhet, Chair of the Commission on Narcotic Drugs, reiterated that "addressing violence against women and girls remains also an integral part of the work of the Commission on Narcotic Drugs".

During the interactive presentation by Ms. Anna Pfeiffer, Diversity Coordinator at UNODC's Human Resources Management Service, participants received information about key principles and available tools of gender sensitive communication. Examples were given about how images and texts can be made more gender-inclusive in order to avoid biased gender representations and to promote equality.

Secretariat to the Governing Bodies on SDG 5